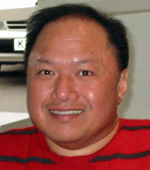 I am going to Cologne to participate as a bowler. My parents were bowlers and they got me interested in this sport. I have been a bowler for 39 years starting with the junior league program in Hawaii.

My main goal in pursuing bowling at that time was that it put me in good graces with my parents and got me out of Saturday chores. Bowling was the one item that solidified my relationship with my father. This is the one common interest that we shared and participated together. This sport has afforded me many opportunities in life and in some degree helped shape my character and personality.

It provided me lessons of leadership, good sportsmanship, teamwork, honesty and most important of all, the value of friendship. Most of my friends today, I have known for as long as I have been a bowler and most of them come from my participation in bowling.

What brought me to Gay Games? In 1994 I was in a car heading to a local tournament from San Francisco to Modesto. As we made our way to Modesto, Gay Games was casually brought up in our conversation. We thought it would be wonderful to take a team or two to the upcoming Amsterdam Games in 1998.

We set up a set of guidelines and formed a new gay bowling league, Amsterdam 98 at Japantown Bowl in San Francisco. Our philosophy was that it would be an all-inclusive league of all skill levels and genders. In 1994, most if not all of the GLBT men and women bowled in their own leagues.

It is 16 years later and I am happy to announce that the league still existd and with two of the founding board members still in place. We are still all inclusive, diverse and primed to be around another 16 years and more.

By the time 1998 arrived, our league had 100 bowlers and we had 20 or more bowlers heading to Amsterdam. It was a success and quite a few of the bowlers continued to participate in future games. As a founding member, things happened which did not allow me to participate in Amsterdam.

My first Gay Game experience came in Chicago in 2006 and I had an awesome experience. The opening and closing ceremonies were memorable. The memory that still stands out in my mind was seeing the mass of participants and supporters make their way to the opening ceremony. I still get tingles thinking about that day.

What do I look forward to in Cologne? My first Gay Games at the international level and the hopes of making new friends and creating lifetime memories. I will come full circle in my Gay Games experience as I will end my trip in Amsterdam before returning to San Francisco.