Share All sharing options for: Ex-BP chief laments lack of out athletes 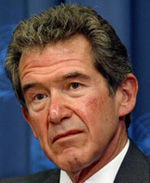 Until 2007, John Browne was chief executive of BP, and was forced to resign after he could not stop a former male lover from going public with details of their relationship. He wrote a column for the London Guardian about David Laws, a member of the British cabinet who was recently forced out after financial improprieties involving his male partner. Browne, 62, talked about how being gay in Britain was still hard for public figures and brought up sports as an example.

Despite the exemplary diversity policies in many companies, my sense is that the business world remains more intolerant of open homosexuality than other walks of life such as the professions, the media and the arts. And it is extraordinary how few openly gay sports stars there are. Even in today's more tolerant age, there are many lonely people out there still afraid to reveal who they really are for fear of marginalisation and abuse. It can only be a matter of time before someone else finds themselves "outed" on the front page of a national newspaper.

Changing the way things are will take time. Our opinions tend to take root in childhood and take a generation to grow through society. Invidious homophobia is much rarer now, but fear of discrimination continues to hold gay people back. As a society that values merit, we should continue to be vigilant against all forms of discrimination – whether in the workplace, in public life or simply in the way we think of and speak to others.

I won't pretend to know anything about Browne's tenor at BP or why Laws had to quit, but the column hit the right points about being publicly out. And his lament about the lack of openly gay athletes could have been lifted from the pages of Outsports.