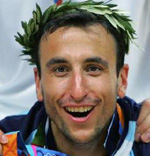 San Antonio Spurs star Manu Ginobli, a native of Argentina, supports his country's adoption this week of gay marriage, the first country in South America to allow gays to marry.

The NBA star told an Argentine newspaper (this is from an online translation):

With regard to the law of marriage between same sex, NBA player was in favor: "I am all for marriage. I think we all have the same rights. Although in reality with regard to adoption do not feel able to give an opinion. "

His reference to adoption was in regards to the gay marriage bill also giving gay couples the right to adopt. I was sent this link from Andrés Duque of the blog Blabbeando, who goes into great detail about the marriage law.

Update: Duque got the video and translated Ginobli's full remarks:

Reporter: You've been told, pardon me, about the polarization of the country and, in addition, yesterday there were two protests in the country which have divided society - and different personalities have expressed what they think about gay marriage, yes or no. Do we have your opinion?

Ginobli: I am in favor of gay marriage - eh - specially of the rights - eh - needed by people who are equal before the law - eh - and it doesn't affect the rest of society... it doesn't, if they are gays ... yes? let them be and do whatever they want, I am in favor, and it seems to me...

Reporter: What about adoption?

Ginobli: Adoption is much more delicate,I don't feel I have the qualifications, I don't know which studies have been done, if there is any background. I know that, I believe - I don't know, as an outside observer, without knowledge of what scientific data there is out there - that for a baby it should be better to be with two dads than to be in an orphanage.

Here is a kissing scene that apparently had people talking:

You can more scenes from the soap opera on Duque's blog. Here is a great quote from one of the actors about portraying a masculine gay man in a homophobic sport while showing some femininity: "You have to be very manly to accept masculine femininity."

It was not long ago that Argentina was a repressive military dictatorship. Now we have NBA players supporting gay marriage and a soap opera with a gay storyline. Argentina is now ahead of the U.S. in its rights for LGBT couples. The world is changing.