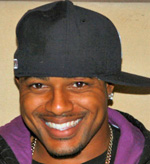 Former Kansas City Chiefs running back Larry Johnson, who used three homophobic slurs last year, angered a judge Friday by failing to meet the terms of his probation for two nightclub incidents where he shoved and spitted on women. From the Kansas City Star:

Johnson, 30, was supposed to work with children at the Kansas City Police Athletic League for his 40 hours of court-ordered service. But Johnson refused to play sports with the children and instead told police officials he wanted to start an art program. The program didn’t draw enough students and quickly fizzled out. He got credit for nine hours of service.

Judge Joseph Locascio said the intention of the community service was for children to get a chance to play with a pro athlete. “Children who go to PAL don’t go there for art class,” Locascio said. “The idea that you would draw pictures with kids who want to participate in athletics is absurd."

The judge said he puts people in jail regularly for violating the terms of their parole, but let Johnson off the hook by allowing him to finish his service in Washington, D.C. (where Johnson plays for the Redskins). Despite the tongue-lashing from the judge, Johnson seemed to not care.

During the upbraiding by Locascio, Johnson didn’t make eye contact with the judge. At one point, Johnson looked at his watch. After the 20-minute hearing, Johnson walked out of the courtroom smiling, followed by his mother and brother.

Johnson has proven himself to be a Class A Dickhead and the judge let him off too easily. In addition to not fulfilling the terms of his probation at the PAL, Johnson also failed to regularly file his monthly probation forms and neglected to inform his parole officer when he was pulled over in Virginia for not having a driving license. A month in jail might have washed the smirk off his face.