Share All sharing options for: A straight guy loves his gay softball team 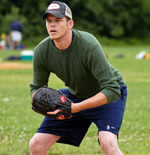 Henry P. Belanger, associate editor of the Good Men Project magazine, has written an entertaining and spot-on column about his experiences as a straight guy in a gay softball league. After a local mainstream league was filled, Belanger joined Beantown Softball in Boston.

I loathe Broadway musicals, and theater generally, and my wardrobe consists almost exclusively of jeans and T-shirts.

Nonetheless, next weekend I will get together with a few dozen gay men for a few hours of hot, sweaty action. It will probably be in the nineties, but we’ll all be wearing leather.

When I get home at the end of the day, I’ll be filthy and exhausted and unable to perform for my wife. I might even phone a buddy or two and brag about my exploits.

Belanger writes about all the preconceptions he had about gays playing sports, some that proved accurate and many others that were debunked. When he first told his straight friends about the league, they wanted to know whether he was hit on.

Invariably, my straight friends would want to know if I got hit on that first season, or if the guys were checking out my ass all the time—didn’t that make me uncomfortable? I don’t have much of an ass to check out (I’m 6-foot-7 and two hundred pounds), and if any of the gay dudes were checking it out, I didn’t notice.

That’s not to say that I wasn’t hit on from time to time (though not by teammates, who know they’d be wasting their time). I was, and I took it as a compliment. I rarely get hit on by anyone, so if you’re telling me I’m good-looking, I’m all ears.

He then listed some differences between playing in gay league vs. a mainstream league and this was my favorite one:

The better teams in the gay league would absolutely wipe the floor with the straight teams I’ve played on and against.

I have been an organizer in the L.A. gay flag football league for years and what Belanger writes about rings true. In our past season, we had about a third of the players who were straight, and the number seems to be growing. The football is at a high level and these guys like the vibe surrounding the league. Many bring their wives, kids and girlfriends to watch.

Man-on-man sex banter is jokingly heard, and the straight guys join in and try and one-up their gay teammates. I sometimes ask new players to try and guess the gay and straight guys on the field and they are invariably off (as was former Dallas Cowboy Michael Irvin, when he showed up to watch a practice last year). Once the ball is hiked, though, any differences in sexual orientation disappear and we all have one goal -- to kick our opponent's ass.

Belanger loves his team and was able to sponsor it for a while. The once-somewhat reluctant player now could never imagine not being a part of the group; it's one more sign that exposure to gay people is the best way to realize we're all the same, save for one difference.