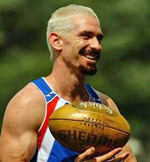 Jason Akermanis, the controversial Australian Football League player who created a storm of controversy by telling gay players to stay in the closet, had his contract terminated by the Western Bulldogs six weeks before the end of the season.

"He hasn't earnt the trust of the group," a source told The Age. "It's a pattern of behaviour. You can’t put it down to one thing. It has just gone on for so long. And we don’t want it to keep going." ...

Last week, The Age revealed that [Alermanis] had again attracted the ire of his teammates and coaches after he had revealed private details of a player meeting to the media.

Akermanis, 33, was slammed for the column he wrote this spring telling gay players to stay closeted, and he followed up by saying how uncomfortable he would be showering with a gay teammate. The resulting furor got him suspended by the club for writing the column. For now, he's out of the AFL for his latest breach and he has indicated he might retire.

Hat tip to Noel from Australia.