Hudson Taylor: Why do you fight for gay rights?

Share All sharing options for: Hudson Taylor: Why do you fight for gay rights? 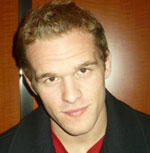 When I profiled University of Maryland wrestler Hudson Taylor and his fight for gay rights in February, he was overwhelmed by the reaction he received. Having a champion straight athlete make a public stand on such as issue struck a chord with a lot of people. From the 400 e-mails and countless stories he heard, Taylor was inspired (with prompting from his sister) to start asking people why they fight for gay rights.

From that came a blog, Why Do You Fight?, which has a simple premise: People are asked "why do you fight for equality?” The anonymous posts from both gay and straight people, some long and others just a sentence, have an inspiring and moving effect. Some examples:

The blog is new and Taylor hopes it becomes a "safe space for anybody to show the reasons for believing in equality and to build bridges." In the e-mails he got after the Outsports article ran, he said he was most moved by those from "kids out there who were pretty lonely and unable to express themselves to anyone." He is labeling submissions from the states they are sent from so someone who feels isolated in a place like Idaho might see a post from a kindred spirit.

He solicited stories from people he met via various Facebook groups, which then led to the blog. Taylor does not mention himself anywhere on the blog, because he said he does not want it to be about him, but rather a place for anyone to share. He is moderating all submissions because he wants to keep the site positive and not have it overrun by haters or spammers.

Now graduated from Maryland, Taylor is applying to law schools this fall and will be a volunteer assistant coach with the Columbia University wrestling team. He has spent the summer teaching at wrestling clinics, interning with a federal judge in New Jersey and indulging in his passion for magic tricks. But he always has time to hear stories from people fighting the good fight for gay rights.

I urge anyone reading this to add their voice to "Why Do You Fight?" It's simple: Go to the blog, find the submission form on the right, say what you want and hit "submit." Since all posts are anonymous, fill in some initials for the name field, and please say what state you are from.