More 'horrible to come out in sports' chatter

Share All sharing options for: More 'horrible to come out in sports' chatter 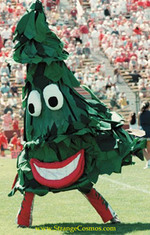 This one comes from the Stanford Daily, I'm afraid. One of their writers, Tom Taylor, has no idea what he's writing about. None. He even gets some basic statistics wrong (he says there are 100 players on each NFL team, and he says there are about 100 openly gay professional athletes in the world) before diving into his thoughts on why talking about the sexual orientation of athletes has no place in sports. Part of his infinite wisdom launches into an explanation of why it would be so horribly difficult for a pro athlete to come out:

When anyone’s personal life is dragged through the press, it must be tough for them to stay focused on work. For an athlete it is doubly difficult, because this creates a feedback loop where a drop in form due to this distraction only serves to intensify the media pressure.

People’s prejudices come to the fore when things are going badly, not because they are valid, but because in these situations it is always easier to find a scapegoat than to solve the real problems. Any bigoted opinions of the existence of a gay player in a team could become a self-fulfilling prophecy. As the player, and thus the team, struggle under the weight of the attention, it would suddenly seem that they are a divisive and destructive presence.

Unfortunately there doesn’t seem to be an easy solution. Some players are probably going to have to take it upon their shoulders to endure all this and lead the way–to inspire others that they are free to be honest and to overcome prejudices so that this career path is open to absolutely anyone with the right skills and athletic ability.

So let's get this right. First, an athlete coming out would have trouble playing well because of all the attention (presumably negative) he would get. Funny though, many gay athletes say they feel staying closeted hindered their performance because hiding is a huge distraction. Second, Taylor seems to assume that things would go badly for the whole team after an athlete came out on the squad. How about the possibility that the team will do well? Will the gay player get the credit because he came out? Taylor doesn't seem to consider that.

It's disappointing to see a columnist for the daily student paper at a top-notch university paint coming out so negatively, not even considering the overwhelming evidence, both quantitative and qualitative, that says to the contrary.

Even with the media, we still have a lot of work to do.