Martellus Bennett has his penis exposed

Share All sharing options for: Martellus Bennett has his penis exposed 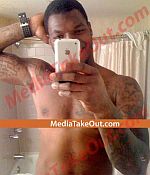 From the ongoing annals of jocks exposing themselves, comes the heartwarming story of Dallas Cowbots tight end Martellus Bennett. From Media Takeout:

NFL baller, and Dallas Cowboy, Martellus Bennett apparently has been doing his girlfriend dirty. So she is getting him back the only way she can . . . by releasing NEKKID PICS of himself that he gave to her.

If you are bound and determined to see more of Bennett naked, click here and follow the link (but Deadspin says all the photos have starbursts over the best parts). Said one commenter on Media Takeout:

Bennett is the dope who was fined after he did a rap video where he rhymed "Romo" with "homo." Hmm, how do we know it wasn't Bennett's boyfriend who released the photos? No homo.

"These pictures were taken four years ago and placed on the Internet recently without my knowledge or consent," Bennett said in a statement released by the Cowboys on Monday. "I understand that they are totally inappropriate. And for that I am sorry. I regret the embarrassment that it has caused the organization."

Related: More stories on athletes and their exposed private parts.