Share All sharing options for: Navratilova wins another Wimbledon title 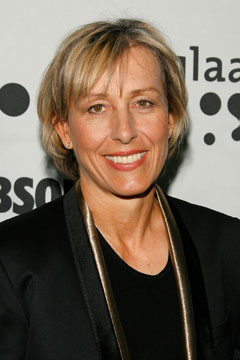 Martina Navratilova has won another Wimbledon title, taking the Ladies' Invitational Doubles crown. She and partner Jana Novotna beat two Americans, Tracy Austin and Kathy Rinaldi-Stunkel, in the finals, 7-5, 6-0. The invitational doubles is kind of like the seniors tour on the PGA; The competitors included other retired names like Conchita Martinez, Martina Hingis and Anna Kournikova.

Still it's great to see Navratilova, who has nine singles and 11 doubles (ladies and mixed) titles at Wimbledon still making a splash at the All-England Club, particularly after she recently ended her cancer treatment.