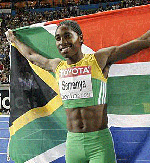 South African track champion Caster Semenya has been cleared by the International Association of Athletics Federations (track & field's governing body) to return to competition immediately. Semenya has been the subject of gender-identity tests for the last year; Finally, that episode is over.

"I am thrilled to enter the global athletics arena once again and look forward to competing with all the disputes behind me." Semenya said in a statement.

Semenya's lawyers said negotiations with the IAAF lasted 10 months and had been held in Monaco, Istanbul and Parish.

"But due to the nature of the matter the parties resolved to keep the negotiations confidential," said Greg Nott, managing partner of Dewey and LeBoeuf's Johannesburg office.

The AP story also said, "it is unclear if she has had any medical procedure or treatment during her time away." That's an odd bit of conjecture on the part of the writers, inserting their own bizarre curiosity with the topic into the story. They offer no evidence that she was even considering such a thing, and there have been no comments about it. It's a sad bit of editorializing that Semenya will probably have to answer to for years to come.