Share All sharing options for: Jilted lover tries to out British footballer 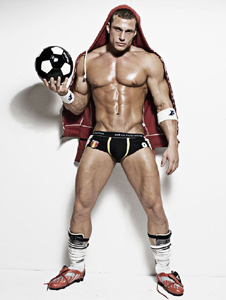 We have speculated for years that the first out active athlete might not announce he's gay...as much as a jilted lover might. We saw an episode like that with Ovie Mughelli. And now it's happening in British soccer. Pink News is reporting on a reality TV star who claimed to have a year-long affair with a British footballer. The TV star has since removed the piece from his blog.

According to the Daily Star, the reality TV star revealed details of the alleged relationship, claiming he and the player met three times a week at budget hotels behind the player's girlfriend's back.

The author wrote that the footballer approached him in a club and asked for his phone number before they began a 12-month affair.

Did anyone catch the blog post or the name of the soccer player?