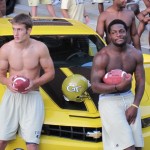 With college football starting this week, the Wall Street Journal looks at what it terms "college beefcake photos," which have become more widespread thanks to the Internet (see gallery below). What's missing is any discussion of the homoerotic aspects of the photos, though there is some discussion about "sending the wrong message."

At some schools, as many as half the players, sometimes more, will strip to their uniform pants, lather up with oil and flex their pectorals while posing with an ever-more-eclectic array of props including chains, sledgehammers, hard hats and, in one recent case, a $120,000 orange Lamborghini Gallardo. These unofficial photos aren't widely distributed. They're printed in small quantities and given to players to hand out to friends and family as evidence of their progress in physical training.

Peyton Manning posed for such a shot with his Tennessee Volunteer teammates in the 1990s (alas, I can't find that photo anywhere. Update: Thanks to a reader it is posted below).

Colts quarterback Peyton Manning says that when he played for Tennessee in the mid '90s, a spot in the front row was a "pride thing," and he and his teammates would arrive to the weight room as early as they could on photo day to do enough lifts and push-ups to make their muscles bulge. "There was a lot of baby oil involved," recalls Mr. Manning. "It helps with muscle definition."

Players take these pictures because they are justifiably proud of the results of their hard work in the gym, and one player's mom last year ordered 15 copies of the poster. But the article, written by Hannah Karp, points out that "even some unofficial team photos where players are fully clothed make schools nervous." She points to the shot of Virginia Tech players "holding hands and leaping gleefully in the air on media day."

A school official deemed the shot "not in our best interest." Translated: It made our players look gay. The homoerotic aspects are the unspoken of 800-pound gorilla in this story. As one commenter, who disproved of the practice, wrote: "I wonder if these stud-muffins realize that a vast majority of their consumers are other men?" So what? Why should jocks, who are never bashful about showing all they got in a locker room -- as anyone who has ever been in one can attest -- suddenly turn into 85-year-old nuns at the thought that another man might be looking at them approvingly?

What is weird is that Karp could not find any examples for this season (she asked me to help in her search and I came up empty). USC did take a shirtless shot, but has yet to release it. If so, it shows how uptight these programs are getting. These are great marketing tools -- these images get a lot of hit on websites, both gay and mainstream -- so why hide some of your best assets?

Here are some of the past shirtless shots from the past few years: