Texans break through vs. Colts; Wes Welker's miraculous comeback; hot player of the week; a totally dumb rule; and the idiot call of the week (by the Cowboys, no duh).

It's very tempting to read too much into opening week, so here are some stats to remember: The defending Super Bowl champ has won 11 openers in a row, including the Saints' win over the Vikings, but only the 2004 Patriots repeated. And of the last nine champions, five won their opener and four lost. So don't get too excited or too deflated based on what happened.

Texans break through: The Houston Texans had been pointing to their Week 1 match against the Colts as the biggest in franchise history and the Texans delivered with a 34-24 drubbing of Indy. The Colts had beaten Houston 15 of the 16 previous tries but played sloppy and uninspired with a bunch of penalties, dropped passes and a key fumble, stupid special teams play and lousy play by both the offensive and defensive lines.

Petyton Manning had 433 yards passing, but threw 57 passes (vs. 10 runs) and was constantly under pressure. In contrast, Houston's Matt Schaub threw only 17 passes, but that was fine with running back Arian Foster running for 231 yards and three touchdowns. Fantasy owners who had Foster rejoiced, save for those who did not start him. On one drive, the Texans went 91 yards in four plays, all running.

It was a lousy start for the Colts, who are all alone in last place in the AFC South after one week. On the bright side, there will be no debate about resting starters while playing for an unbeaten season.

Miracle man: I hate the New England Patriots but also hate great players suffering devastating injuries even more. So it was cool to see receiver Wes Welker back on the field, only eight months after a knee injury that normally takes a year to heal. Welker scored two touchdowns as the Pats beat the Bengals 38-24. He said he is not yet 100%, but it's still amazing to see him back and contributing.

The anti-miracle man: While Welker comes back much sooner than expected, high-priced Colts safety Bob Sanders can't stay out of the trainer's room. Sanders missed most of last season with a biceps injury and was deemed ready to go this season. However, he has missed as many games as he has played the last several years, so it was no surprise when he went out in the first quarter with what was called an elbow injury.

Life without McNabb: I never understood the nonchalance some Eagles fans had to the trade of Donovan McNabb. Kevin Kolb, who had a handful of starts, was being hailed as the fresh new face. I read how training camp was a lot looser without McNabb and and that the younger receivers bonded with him better than they did the vet. Kolb, though, suffered a concussion in the first half of the 27-20 loss to the Packers, so his time as the starter got off to a lousy start. With Michael Vick playing pretty well in relief, there's already a mini-QB controversy brewing in Philly. Meanwhile, McNabb was a winner in his Redskins debut against the Cowboys, though the offense did not score a touchdown.

Hot player of the week: Watched a lot of the Rams-Cardinals game (thank you, NFL Sunday ticket) and saw a lot of the super-hot receiver Danny Amendola. The former Texas Tech receiver had a short stint with the Cowboys until signing with the Rams. His quarterback, top pick Sam Bradford, is quite a cutie himself.

Break up the Titans: Tennessee blasted the Raiders, 38-13, not a huge surprise. But it was the Titans' ninth win in the last 11 games since Vince Young came back as the starting QB.

Crappy rule: The Bears beat the Lions, 19-14, but needed a close end zone play to preserve it. With time running out, Calvin Johnson caught what looked like the game-winner, but the ball came out after he had already hit the ground with both feet inbounds and his his knee and arm touching the ground. One official even signaled touchdown. But the NFL rule states the following:

Technically, the call was correct but under any common sense viewing of the play it looked like a catch. It's weird that a ball has to only cross the plane of the goal line for a nanosecond for it to be a rushing TD (even if t pops loose immediately afterwards), but a receiver can have all his body parts hit the ground while he still possesses the ball, yet it's not a catch until he gets up with the ball still in his hands. The rule is stupid, defies common sense and needs to be changed. If it walks like a catch and talks like a catch and looks like a catch, it's a catch. To add insult to injury, the Lions lost QB Matthew Stafford for several weeks due to a shoulder injury earlier in the game.

Flameout: The 49ers were the hot pick (myself included) to win the NFC West. They looked awful, though, in their 31-6 loss at Seattle, in Pete Carroll's coaching debut with the Seahawks.

Feeling unloved: Randy Moss feels unappreciated and he spent 15 minutes telling the media that after his Patriots romped to a Week 1 win. Moss is hurt he didn't get a new contract and he expects to be gone after this season.

Moss is 33 and receivers that old normally don't get big-money contracts. It will be interesting to see whether Moss plays hard or reverts to his form at past stops in Oakland and Minnesota (near the end of his time there) and starts quitting during games.


Idiocy: The dumbest call of the week came in Washington, courtesy of the Dallas Cowboys. The had the ball at their own 32 with four seconds left in the first half. Common sense would call for a kneel-down and a sprint to the locker room. But the Cowboys decided, for some dumb reasons, to try a pass play. Tony Romo threw a quick shovel pass to Tashard Choice, who was going nowhere. Instead of falling down and ending the half, Choice fought for extra yards and fumbled the ball. It was picked up by DeAngelo Hall of the Redskins, who ran in for a touchdown. No surprise that Wade Phillips is the Cowboys coach; he's the very definition of clueless and his team often emulates him.

Cut him: Dallas offensive tackle Alex Barron was a human turnstile against the Washington Redskins and his holding call on the game's final play after the Cowboys had apparently tied the score on a touchdown pass cost them the game and perhaps his job. Barron has been the most-penalized player in the league the past five years and was a replacement for the injured Marc Colombo. Cowboy fans everywhere will be sending Colombo get-well-soon cards.

All in the family: My friend JP and his partner Matt have two adorable kids -- Hayden, almost 2, and Ashlyn, 2 months. JP is a diehard Titans fan and he sent me this opening day photo: 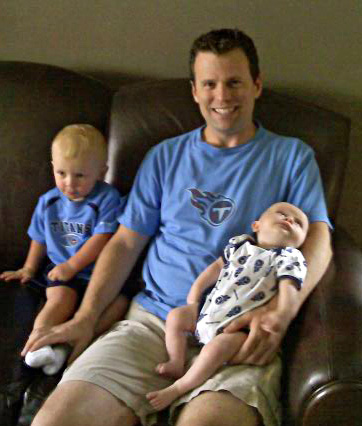 Poor kids will be scarred for life rooting for that team.