Clinton Portis on 'packages' in the locker room

Share All sharing options for: Clinton Portis on 'packages' in the locker room 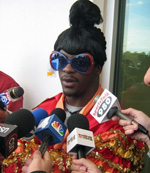 Washington Redskins running back Clinton Portis, who enjoys cross-dressing, says that female reporters in a locker room are trouble because they can't help but look at all the hot jocks there and vice-versa.

"You put a woman and you give her a choice of 53 athletes, somebody got to be appealing to her. You know, somebody got to spark her interest, or she's gonna want somebody. I don't know what kind of woman won't, if you get to go and look at 53 men's packages. And you're just sitting here, saying, 'Oh, none of this is attractive to me.' I know you're doing a job, but at the same time, the same way I'm gonna cut my eye if I see somebody worth talking to, I'm sure they do the same thing."

Portis made his comments in reference to Ines Sainz, the reporter for TV Azteca who alleged she was harassed while visiting the New York Jets locker room last week. The NFL is investigating the allegations.

The NFL condemned Portis' comments as "clearly inappropriate and offensive," which they are. And he later apologized. But they do speak to the mentality a lot of jocks have, who assume that just because they are hypersexual they assume someone else is, even a female reporter trying to do her job. Wonder how he would react to an openly gay beat reporter? He'd probably wear a burka lest the dude look at his package.