Jimmy Anderson, a cricket star in England who is married with a child and another one due, has posed naked for the British gay magazine Attitude. Reports the Daily Mail:

The October issue, published on September 27, features the fast bowler in numerous naked poses in a London car park chosen to give a gritty urban background for the shoot.

Anderson is understood to have had no qualms about promoting his image as a gay icon despite the waves it might cause in the conservative world of English cricket.

Among those who have also posed for Attitude include David Beckham, Ben Cohen and Freddie Ljungberg.

It is hard to imagine a straight American jock doing this for any gay magazine. Another sign that some European jocks are more secure in their sexuality than their American counterparts.

Update: Thanks to Marc Naimark for this link of Anderson posing with other cricketers for a campaign to raise awareness on prostate cancer: 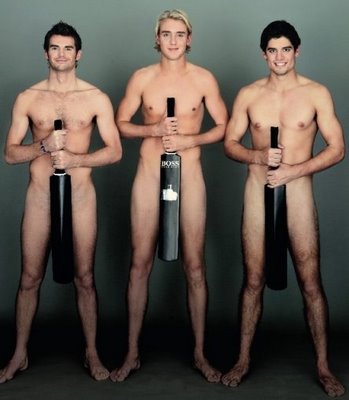