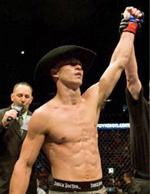 Mixed martial artist Donald "Cowboy" Cerrone (right) hates his upcoming opponent Jamie Varner so much that ke called him a "fag" and said he hopes he literally kills him during their Sept. 30 WEC fight. He said this on Tapout radio:

“This is real, this isn’t like the WEC trying to get us to you know to amp it up, which I’m not. He’s really a fag. I mean, that’s what he is, you know, and his true colors will show up. You can’t hide your colors, man. They’re going to turn up and everyone’s going to see. He’s going to call timeout or he’s going to look for a way out, he’s got the bitch gene, man, and when you have a bitch gene it don’t matter what you do you can’t fight and you’re either born with it and that’s who you are as a person and you can’t fix that, you know, and it’s going to come out. ...

So, I hope my emotions take over and I just kill this dude. I hope this is the first death in MMA.”

Of course, once the you-know-what hit the fan, Cerrone then backtracked, sending this tweet:

I don’t really wish death on anyone!! Just got caught up in talking s***! My apologies @jamievarner! Took it to far

“We will not tolerate a fighter who makes comments that are not consistent with our company values, nor will we tolerate the use of slurs that may offend any segment of the public. We are aware Donald issued his own immediate apology on Twitter, but we still needed to speak with him about it, and to issue our own statement making our position known.”

For his part, Varner took the high road, saying the issue would be settled in the ring. Varner beat Cerrone in their previous fight in what was a controversial decision.

I understand many fighters are morons who say crap like this all the time to get attention. But we at Outsports are always going to call them on it and not give anyone a pass due to their lack of brain cells. I hope that one day Cerrone gets submitted in the ring by a guy who then gets a congratulatory kiss from his boyfriend. He'd probably retire in humiliation.

Update: Cerrone won the rematch via a unanimous decision.