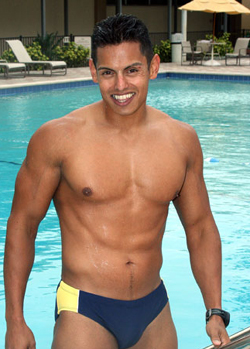 His dreams of Gay Games gold came crashing to a nightmarish end about an hour after they started, in the first of seven events that Hector Torres registered to compete while in Cologne, Germany. On the first day of competition, no less.

Torres, 32, who lives in Orlando, Fla., was the fifth of about 500 competitors to finish the 1.5-kilometer swimming portion of the Olympic distance triathlon, held Aug. 1.

"I was excited," Torres said of his swim, which put him in first-place in his age group.

He was about three-quarters of the way done with the 40-kilometer bicycle portion when he attempted to pass another cyclist.

"I told the [other] cyclist, 'I'm passing on your left,' because that's how you pass," Torres said. "As soon as I started passing, the front tire of the other cyclist veered left, and his handlebars caught with my handlebars."

The other cyclist stumbled, and Torres flew over his handlebars, landing with a thud and a direct impact to the back of his helmet.

Torres was cycling at 27 miles per hour at the time, while the other rider was at about 18 miles per hour. Torres' helmet flew off after he first impacted the ground, and then he hit the back of his head again.

An ambulance took Torres directly to the hospital, where he waited about an hour before he was treated. Ultimately the hospital staff gave Torres some medication for the pain, took x-rays of his ankle, hip and head, and told him he was fine, cleared to leave. Torres returned to his hotel that night, but feeling terrible. He couldn't keep down any food, an issue that continued the next day. Torres went to another Cologne hospital the following day. Doctors examined Torres and told him that he had a skull fracture, bleeding on the brain and more. He was immediately admitted to the intensive care unit—with, arguably, the most severe injury in Gay Games history.

"I was extremely sad. It was extremely depressing, and I was in a lot of pain," Torres said. "I'm the type of person who is always on the go, go, go. But now I'm out of commission. It was very depressing."

Torres stayed in that second Cologne hospital until Sunday, August 8, and then flew home to Orlando the next day.

"The flights were horrible, extremely uncomfortable," Torres said. "When we landed [in Orlando], I was completely immobilized; I couldn't walk."

That Monday night, he saw a doctor—and by the next morning, Torres was admitted to a hospital in Orlando for treatment of a herniated disc and more. He was released Friday, August 13.

"I have a four-week recovery plan, and cannot ride my bike for six weeks, but it all depends how my body and my brain reacts to everything," Torres said. "I'm taking it one day at a time.

Torres, who needed the aide of a walker at one point, had also lost about 15 pounds.

"I can't believe this actually happened to me," Torres said. "Sure, injuries happen all the time to others. But, you never think it's going to happen to you, and when it does happen to you, it takes its toll on you.

Torres' hearing also has been affected, and he will be going for physical therapy for at least two months.

"I'm angry, upset. But anger isn't going to do anything. All my energy now is spent recovering. I'm disappointed, but I'll be back," he said.

Read more from Ross Forman at his blog.