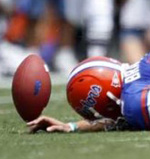 If the University of Florida is the fourth-best college football team in the country, then it will be an incredibly weak year in college football. Florida beat Miami of Ohio, 34-12, but that score is highly misleading. It was 20-12 in the fourth until the Gators scored on a 72-yard run and a lucky throw-it-up-in-the-end-zone-and-pray touchdown pass on fourth and 21. And this came against a Miami team that won one game in 2009.

How bad was the Florida offense, now that Tim Tebow is in the pros? With 12 minutes left in the game, the Gators had 28 total yards. The Orlando Sentinel sums up the ineptitude pretty well:

Eight fumbles, including five botched center snaps from the shotgun formation, only 41 passing yards and minus 16 rushing at the end of the third quarter. Although they finished with 212 yards, 187 of them came in the final 13 minutes.

The center snaps were a joke. Center Mike Pouncey snapped the ball seemingly everywhere but into the hands of new quarterback John Brantley. The result was 60 yards lost and a turnover. When a team can't execute one of football's most basic plays, you know they have their work cut out for them.

I thought the Florida result was the biggest news of Week 1, and it shows the Gators were ranked so high more because of their name than their talent.

Saturday wasn't a banner day for SEC dominance -- Mississippi blew a 21- point lead and lost to Jacksonville State, 49-48, in double OT. Later, LSU did beat North Carolina, 30-24, but had to hold off a furious rally from the depleted Tar Heels.

I would love to hear what other fans saw on opening weekend.