Share All sharing options for: Swimmer Stephanie Rice: 'Suck on that faggots!' 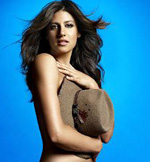 Australian gold medal swimmer Stephanie Rice has apologized for a Twitter post in which she gloated over Australia's rugby win over South Africa this weekend by writing: "Suck on that faggots!" Ian Roberts, a former Aussie rugby star who is openly gay, responded by calling Rice an "idiot."

"I did not mean to cause offense and I apologize," Rice said. "I have deleted it from the site."

The apology was not enough for Roberts, rare in that he was openly gay while still an elite rugby player in the 1990s.

"She is an idiot ... and anyone who continues to endorse her as an athlete is an idiot as well," Roberts told News Ltd. "And I say that with a very sad tone in my voice. What a fool. ... "It is never acceptable to belittle gay people."

Rice's comment could cause trouble for Davenport, the Aussie underwear company that Rice endorses and which is popular among gays Down Under. It will be hard for the company to square asking gay people for their money, and then turning around and giving a chunk of it back to Rice as an endorser. Especially with her lame non-apology apology. Did she think saying "faggots" would not cause offense? Maybe she really is an idiot.

Update 2: Matthew Mitcham, the Aussie diver who is openly gay, had this to say on his Twitter feed (thanks to Joe Guckin for the tip):

It was offensive & very thoughtless, but being friends with her for 2yrs, I know she is not homophobic. ... She luvs gays but used very ill-chosen language.