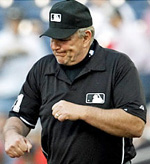 Davidson said he decided to throw out 44-year-old Sean A. Ottow of Waukesha, Wis., in the bottom of the seventh inning Tuesday night because he wanted to make sure Molina wouldn't do something to escalate the situation.

''Molina, I thought he was going to go toward (the fan) and I said, 'I'll take care of it,''' said Davidson, who was the plate umpire. ''I was going to wait until between innings and not be so obvious, but I figured after he said that, he was very intoxicated, I needed to take care of it.''

Ottow, who was cited for disorderly conduct, disputes Davidson's account:

''I never swore at him,'' Ottow said while handcuffed to a bench on Miller Park's service level on Tuesday night. ''He just got the umpire to throw me out. We were bantering back and forth and I guess Molina couldn't take it anymore.

A columnist for Bleacher Report said that Davidson overstepped his bounds, writing: "Nowhere in the Major League Baseball rulebook does an umpire have the power to eject a fan who never enters the playing field."

But former umpire Bruce Froemming told the St. Louis Post-Dispatch that "the umpire has the authority to eject a fan who has crossed the boundaries of decency." Froemming happened to be at the game, and said he heard Ottow used profanity and that Davidson asked security to have him ejected.

Davidson's actions bother me, especially in not knowing exactly what Ottow said (Molina, the catcher, would not talk about it after the game). Heckling is a sports tradition, so ejecting someone for some riding a player is excessive. Had the fan been verbally abusive and bothering other fans, they could have summoned security to deal with Ottow. But this appears to be Davidson taking it upon himself to toss the fan. Post-Dispatch columnist Bernie Miklasz wrote a devastating takedown of what he calls Davidson's tradition of grandstanding and lousy calls.

Had I been sitting next to Ottow and heard him use homophobic language, I would have told him to shut up, but I would not expect him to be ejected unless he escalated the situation.

Hat tip to Kathy for the item.