Share All sharing options for: Greco-Roman wrestler comes out publicly 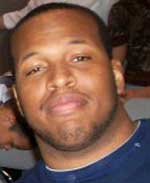 In October, I profiled AK, a former University of Maryland football player and now an elite-level Greco-Roman wrestler who is gay. At the time, AK did not want his full name used, but that has now changed. His name is Akil Patterson and he decided to come out publicly since his family and close friends and many in the wrestling community know.

Patterson's story is one of perseverance while battling addiction and loneliness caused by not fully accepting his sexuality. I think a lot of people can identify with his struggles and urge you to read his story fresh now that you know his name