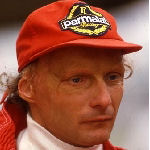 Niki Lauda was a Formula One champ back in the 1970s and '80s. Now he says gays shouldn't dance on TV, which is essentially saying he doesn't want any dancing on TV (stereotype alert! stereotype alert!). After telling the daily tabloid Oesterreich that he loves gays, he said they're bad role models for kids:

I have absolutely nothing against homosexuals. In fact, quite the contrary. In my airline Fly Niki I even have a few working for me, there is even some who are trainers. All I want is that children and teenagers don't get to see the wrong role models in dancing. There are so many good things in our culture and one of those is that men dance with women. At this rate we will soon have to be saying sorry because we are heterosexual.