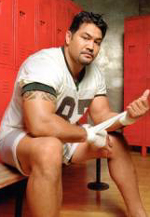 Out former NFL player Esera Tuaolo will sing the national anthem at the Los Angeles Clippers' Equality Night next Wednesday, Feb. 2, presented by Outsports and Equality California.. Esera was the first NFL player to sing the Star-Spangled Banner before a game he played in; He's also sung it at the Pro Bowl and for various NFL and NBA teams. Esera will also be at the pre-game reception at the City View terrace at Staples Center, along with the NOH8 campaign.

There is still a smattering of tickets available for the event, so if you want to attend head over to order your tickets ASAP.