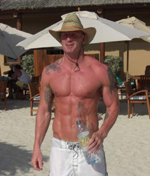 Out pro rugby icon Gareth Thomas is headed to Los Angeles this week and will sit down with Ellen DeGeneres on her daytime talk show on Tuesday. As the show writes on their Web site:

While that statement isn't true (Ian Roberts did it before Thomas), I certainly hope Ellen gives Gareth a good amount of time and talks with him about being gay in rugby and living a lie for so many years. He wasn't on the video promo of the show and was listed third on the rundown behind a 9-year-old breakdancer.