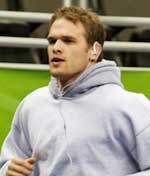 Athlete Ally is a website paired with a YouTube channel with the goal of getting pledges from athletes, coaches, administrators and fans (regardless of sexual orientation) to end homophobia in their sport. Taylor’s outlines his mission on the home page of Athlete Ally:

“I created the Pledge so that we, as an athletic community, can take proactive steps to end homophobia in sports. When we inspire entire teams and athletic departments to commit to a new standard of athletic integrity, we will change the environment in locker rooms and on playing fields. Adding your name to the growing list of supporters is the first step to make a difference.”

So far, 432 people have signed the pledge. Taylor told me that 83% of the signers have allowed him to use their names and 52% of the signers identify as athletes. It has already had some successes. One male high school basketball player forwarded to his teammate and Taylor reports that “apparently a lot of the kids on the team signed it and responded very well.” In addition, the National Wrestling Coaches Assn. joined the AthleteAlly Facebook fan page.

Taylor describes the goal of the pledge:

The larger goal is to ultimately ask signers to allow us to generate stats on each signer’s affiliated sport and athletic team or sports club. The Pledge will plot these statistics as a user-friendly online database.

This will allow all athletes to locate the “allied” athletic teams and clubs in their sports and geographic locations. Any viewer will be able to access the number of players, coaches, fans, parents and other advocates affiliated with a specific team or sports club who signed the Pledge. Signers will select whether or not to list their names.

The dream is for the database to provide ratings to indicate the extent to which each team or club signed the Athlete Ally Pledge as compared to all other represented teams and clubs. I want high numbers on the Pledge so that I can use it to show universities and major athletic teams and organizations that today’s athlete is an ally. I’m hopeful that the data can compel better policies and more education programs.

While Taylor wants as many people as possible to sign the pledge, his larger goal is to get whole teams to make public commitments.

“The only way for this to really be something to be proud of is to go after whole teams,” he said.

In studying how efforts evolved to end female genital mutilation in Africa, Taylor discovered that it literally took a village to commit since it made everyone accountable. One idea is to hold campus-wide events where teams publicly signed the pledge with media present.

Taylor has enlisted his own allies in this effort, Maggie Manville and Austin Hendrix of Eastern Michigan University. Manville is the driving force behind the Student Alliance for Gay Athletes of which cross-country runner Hendrix is an officer. The two will be meeting with their school’s athletic administration to try and get all EMU teams to sign the pledge. Outsports will keep you updated on this.

Taylor’s two video projects continue the Ally theme.
"The first is The Ally's Playbook where I offer athletes each week some proactive advice on how to change the culture of their team. The first video is up":

"The second project is The Ally Effect. The idea is to try to encourage lgbt allies to post a video in which they commit to taking proactive steps toward making a difference. If enough allies pledge to make a difference in their community, it will have an effect."

Taylor is an amazing ally in the fight for acceptance of LGBT athletes in sports and his latest idea has goals that will take a while to reach. But the potential is great for raising the visibility of the issue on campuses and making it one that can’t be ignored. I encourage all of those reading this to take the pledge and help Taylor build this important database.