Fire Andy Reid Now: My lead-in is a tribute to longtime Outsports contributor Joe in Philly. He would often use as his signer on the Discussion Board “Fire [insert current Eagles, Phillies, Flyers, 76ers coach] Now.” After the Eagles – the most hyped team in years – fell to 3-6 by losing to the Arizona Cardinals, 21-17, “Fire Andy Reid Now” are the four most popular words in Philly.

Joe had a great tweet right after Sunday's debacle: “I'll keep saying this til someone listens: Eagles' woes due to bad karma for not addressing DeSean's anti-gay slur.” Bravo! Jackson in July called a radio caller a “gay-ass faggot” and while he apologized the Eagles took no action.

Of course, the Eagles had no problem sitting Jackson against the Cardinals (3-6) after he missed a special teams meeting (apparently since he overslept). Call someone a faggot? No problem for us. Show up late to a meeting? You're benched.

The Eagles have lost five games this season they led in the fourth quarter, including four at home. They were the self-proclaimed “Dream Team,” signing a ton of big-name free agents. I had the Giants winning the division but then succumbed to the hype and picked the Eagles and am kicking myself. All the big names haven't melded into a team and Michael Vick is regressing as a quarterback.

At 3-6, the Eagles would have to win their last seven games to have any playoff shot, and that's not going to happen. Reid has a contract through 2013 but if the Eagles finish below .500, I find it hard to see a justification for him keeping his job. He has made only one Super Bowl in his long tenure and lost four NFC title games. Some guys just stay around too long and Reid fits the bill.

They're No. 1: Imagine predicting in July that the Colts (0-10) would have the No. 1 pick in the 2012 NFL Draft. You would have been drug tested on the spot. But the odds of that happening shot up tremendously after the Colts lost 17-3 to Jacksonville (3-6). Not only did it keep the Colts winless, but with Miami and St. Louis (each 2-7) winning, it left the Colts two games ahead (or is that behind?) in the race for the No. 1 pick, widely expected to be Stanford QB Andrew Luck.

Of the Colts' six remaining opponents, only two – Carolina and Jacksonville – have losing records. Indy has a bye next week and if they lose to Carolina on Nov. 27, they will almost certainly enter their Week 17 game at Jacksonville at 0-15. Peyton Manning is the Most Valuable Player in the history of organized sport.

If Manning is cleared to play in 2012, the Colts' decision on Luck will be the most scrutinized draft pick in league history. I keep changing my mind on what the Colts should do, but if Manning is healthy and if Luck is a "franchise QB," draft Luck and let him sit and learn behind Manning for a couple of years. The wrinkle here is that Luck might not want to sit and could force the Colts' hand since he has another year of eligibility and could opt out of the draft.

No second guessing: The Saints (7-3) beat the Falcons (6-3), 26-23, in overtime on a chip-shot field goal. The play was set up when the Falcons got stuffed at their own 29 on fourth-and-inches. It would be normal to rip Coach Mike Smith for such a daring call, but I won't. The Falcons had run for an average of more than four yards in the game, so getting a few inches was not a stretch. Had they punted, I could have seen Drew Brees dink and dunk downfield and Atlanta never getting the ball back. Smith made a good call, but his team just didn't execute well enough.

Fading: So much for the Bills as a playoff team. After losing 44-7 to Dallas, the Bills dropped to 5-4. The league's highest-scoring team two weeks ago, the Bills have only 18 points in their last two losses, both blowouts. A winning record will be an accomplishment, quite a comedown after their 4-1 start.

After team dropping are the Lions. They started 5-0 and now have lost three of four, including a blowout at Chicago. At 6-3, the Lions are in a scramble for a wild card (forget winning the division) and have two games left with the Packers, plus dates with the Saints and Raiders. I think the Lions will join the Bills on the playoffs sidelines.

Mild, mild West: At 5-4, the Raiders would be in second place in seven of the eight divisions. Fortunately for them, they play in the AFC West, where 5-4 gets you in first place (and a home playoff game should they win the division). The Raiders, though, only have a one-game lead over the Broncos, Chargers and Chiefs.

As for Denver, watching Tim Tebow play quarterback makes my head hurt. He was 2 for 8 passing, yet the Broncos won at Kansas City, and Tebow is 3-1 as a starter. He has set the quarterback position back 80 years, yet a win is a win; it's all pretty bizarre.

Go figure: The Houston Texans have never made the playoffs in their nine years in existence. Yet at 7-3, the Texans would be the AFC No. 1 seed if the season ended today. Of the Texans' six remaining opponents, only Atlanta (6-3) and Cincinnati (6-3) pose any real threat, so they could easily go from playoff virgins to home field advantage. But there are still a lot of games left and the conference is tightly bunched. The Patriots (6-3) seized control of the East, while the Steelers (7-3), Bengals (6-3) and Ravens (6-3) will fight it out in the North. One thing you can book, though, is a division title and a home playoff game for Houston.

Things are more clear in the NFC. Barring a collapse, the Packers (8-0) and 49ers (8-1) will get the two top seeds. The 49ers' pulsating 27-20 win over the Giants (6-3) gave them a two-game lead over every team in the conference aside from the Packers. Jim Harbaugh is the easy Coach of the Year and Alex Smith is my call for Comeback Player. 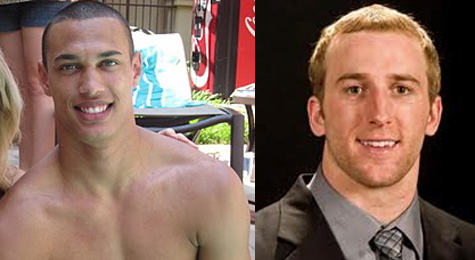 Hot players of the week: The choices this week are Jacksonville rookie safety Chris Prosinski from Wyoming, and Buffalo wide receiver David Nelson. Nelson is getting a lot of attention for what he did after scoring a touchdown against the Cowboys. Nelson ran the length of the field and hugged Dallas Cowboys cheerleader Kelsi Reich, his girlfriend: