Share All sharing options for: Eagles players would not know how to deal with a gay teammate 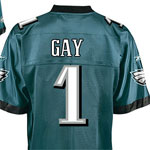 "Which Phillies and Eagles are gay?" is the provocative, if somewhat misleading, headline on a story in Philadelphia magazine by Robert Huber. The story does not play a guessing game (though it does mention a bisexual Phillies player) but simply asks the question of Eagles players, along with some from the Flyers, about whether they could accept a gay teammate.

I talked to some 20 Eagles players about having a gay teammate. And I got the feeling, going around that locker room after practice, that I’d entered a time warp: Having a gay teammate would be troublesome for many Eagles—especially sharing the shower—but it was more than that. For many players it was, in fact, a brand-new idea:
“Never thought about it. Never happened.”
“That would be different.”
“Wow. I don’t know, man.”

Many of the players Huber talks to are uncomfortable with the subject, saying they are not sure how they would react to having an openly gay teammate. Even Nnamdi Asomugha, who comes across as sophisticated and articulate, says, "I don't know." And this is a guy who has acting designs, a field where gay people are prominent.

It's a somewhat discouraging look, but not unexpected since this is a rather common answer. Athletes love routine and having a gay teammate could upset that. And, of course, some players were afraid they would be looked at funny (why do so many straight guys think they're so desirable?). But there were some rays of hope:

But I also found a thoughtful, everybody’s­-welcome attitude among many Eagles when I asked about gay teammates.

“A lot of guys who are open-minded would be fine with it,” guard Evan Mathis told me. “The way I hear guys talk sometimes, I think some guys might be a little affected by it. I’d be fine with it.”

“If you’re not meshing with all your teammates,” Mathis said, “that can be a big problem. Chemistry is a big part of professional sports, and the potential for somebody who doesn’t really understand it, who does have homophobic tendencies, that’s their fault—but it’s there. And probably why you don’t see anybody out.”

Like it or not, the fear of players coming our is still real, as evidenced by this anecdote Huber tells of Brian Sims, whom we have written about extensively:

Brian Sims is a Philly lawyer now running for the state legislature and a former football star at Bloomsburg; he came out as gay at the end of his senior year a decade ago (and was utterly accepted by his teammates). Sims knows three current, closeted NFL players, and he reached out to them to see if they’d talk to me; he told them I wouldn’t reveal their identities, and he never told me who they are. They all said no, and one emailed back in outrage to Sims, who paraphrased the response for me:

WHAT THE HELL IS THIS? I told you from the get-go, I’m not coming out. You PROMISED an anonymous conversation. Just telling anyone­ we talked breaks our deal.

That I would even know of this player’s existence­—though he would remain nameless­—set him off. Now that’s fear.

The piece is quite long but well worth reading. A lot of it is background that our readers are familiar with, but offers a good state of where the issue stands. The interesting part about the Flyers are the rather positive comments made by Wayne Simmonds, who called Sean Avery a "faggot" during a game. There is also this juicy tidbit for Phillies fans:

In fact, a recent Phillies player, a renowned womanizer, has been rumored to be quite interested in men. There are whispers in gay circles about him picking up men at Knock, a bar on Washington Square West, and taking them back to his condo. Phillies insiders still murmur about his bisexuality.

Please let it be Cole Hamels or Hunter Pence (that's wishful thinking, since I no nothing about either guy).

I still think that despite the uncomfortableness, an openly gay player would be accepted. A lot would have to do with the support he gets from management and coaches and his place on the team. Are players bothered by it going to quit? Athletes are very regimented and would eventually find it's much ado about nothing.

I think pro sports is where the military was 15 years ago on gays and lesbians serving openly. It was a huge deal then, but when Don't Ask, Don't Tell was repealed this year, people mostly yawned and now even opponents of its repeal say they were wrong. Life goes on and it will in any locker room that has a gay player. Everyone needs to get over it.