Life is good: Baseball is back!

Share All sharing options for: Life is good: Baseball is back! 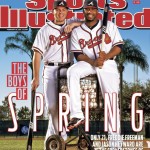 In an attempt not to have baseball played in November again, the 2011 season began a few days earlier than in seasons past. So I had no choice but to blow off work, buy some hot dogs & beer, and settle onto my couch and begin the journey of a 162-game Major League Baseball season.

The Braves, Yankees, Reds, Angels, Padres, and Dodgers all won on Opening Day while the Nationals, Tigers, Brewers, Royals, Cardinals, and Giants lost. It is hard to put value on these first games because the season is so long but some of these teams might look back to the results of Opening Day if their playoff chances are decided by one game or less.

Many dramas will be unfolding over the course of the next seven months and I would like to highlight some that I find most interesting...

Battle for the NL East: Almost everyone in the world is picking the Phillies to take their division and easily make it to the World Series, with good reason because of the phenomenal four in their starting rotation of Halliday, Lee, Hamels, and Oswalt...WOW! However, the 2010 Wild Card winning Braves have a pretty impressive four of their own in Lowe, Hudson, Hanson, and Jurrjens. The Braves might just have the edge because of their superior bullpen.

Three team race for the AL East: Boston looks to be the favorite here because of their acquisitions of Carl Crawford, Adrian Gonzalez, and Bobby Jenks. The Yankees are never out of the conversation because of the big talent, big money players always on their roster. The Yanks starting rotation is questionable other than Sabathia but the impressive back end of their bullpen of Joba and Mariano just got better with the addition of Rafael Soriano. The Rays lost some valuable players but they also gained some potentially potent offensive players in Manny Ramirez and Johnny Damon but is it enough to repeat as winners of this tough division.

How the NL West will be won: Can the World Series Champion San Fransisco Giants repeat their success of 2010? Their pitching is still great but the Giants did not make any significant off season moves while the Padres made great improvements even after losing Adrian Gonzalez by adding Bartlett, Hudson, Hawpe, and Maybin. The Dodgers have much to prove after a very disappointing 2010 but the maturation of their pitching staff and improved health of their offense could actually make them contenders for the NL West.

There are many more teams and many more stories that will factor into this season but I think the 2011 World Series participants will most likely come from the above mentioned divisions. However, anything can happen from day 1 to day 162 and the three divisions not mentioned might be more involved in the post season picture than I have envisioned. Naaah, probably not.