Share All sharing options for: Tom Brady sports a ponytail 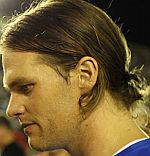 Normally, the hair styles of NFL quarterbacks are no big deal, but when you are married to a superstar model and start to look more like Justin Bieber than a jock, fans take notice. Such is the case with Tom Brady.

The New England Patriots quarterback caused a stir last season when his new mop of hair had people wondering if Gisele Bundchen's husband was more focused on fashion than football. It was absurd media overkill considering that Brady won the NFL MVP award, but I sensed an undercurrent questioning Brady's manhood. So now we get Brady sporting a ponytail and fans are once again discussing it.Brady and Bundchen were in Rio for Carnival this weekend and photographers snapped shots of him with a new hairdo. It looks like a half-hearted ponytail since there's not much of a tail. Somehow, I don't think a guy with millions of dollars, three Super Bowl rings and a supermodel wide really cares what anyone thinks.