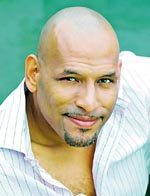 NC State basketball star CJ Leslie tweeted last night that he wouldn't want gay people in his locker room, and that John Amaechi is "to [sic] big to be gay." We reached out to Amaechi, who was also on ESPN's Outside the Lines earlier today, for a response to Leslie's comments.

I would advise him to listen to the reasoned arguments of people like Brendon Ayanbadejo and educate himself; he has already and will continue to have gay people in his locker room and while he is wondering if they are looking at his genitals, they are focused on taking his minutes and his place in the NBA.

I have heard quite a few people say we shouldn’t be penalising people like this kid and the hockey sports agent for expressing archaic views from a first amendment rights perspective.

However, I would suggest that as the incidence of these damaging and obtuse perspectives is ever increasing, we should remind those that can’t resist spewing bigotry in 140 characters, that their right to speak exposes them to of right of balanced and educated people to rip their puny logic and hypocritical perspectives to pieces and call them out as ignorant.

Did you know NC State has a 45% graduation rate for its basketball players? You would think that would be a larger concern for their players - the vast majority of whom will never join me in pulling on an NBA jersey.

Also, “too big to be gay”? Sounds like he’s put a lot of thought into that conclusion...