Charles Barkley: 'I’d rather have a gay guy who can play than a straight guy who can’t play'

Share All sharing options for: Charles Barkley: 'I’d rather have a gay guy who can play than a straight guy who can’t play' 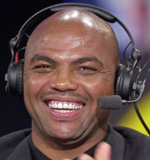 Charles Barkley gives an awesome interview to Mike Wise of the Washington Post, reacting to the news that Phoenix Suns President Rick Welts is gay. Barkley said he has played with gay players while he was in the NBA and their presence had zero negative impact. All he cared about was whether a guy could play or not.

“I really like ESPN,” Barkley added. “They do a great job. But like once every two or three months, they bring all these people on there, and they tell me how me and my team are going to respond to a gay guy.

“First of all, every player has played with gay guys. It bothers me when I hear these reporters and jocks get on TV and say, ‘Oh, no guy can come out in a team sport. These guys would go crazy.’ First of all, quit telling me what I think. I’d rather have a gay guy who can play than a straight guy who can’t play.”

Barkley said that it was common for other players to gossip about who was gay, saying it was human nature, and adding that it was "them bible thumpers, who are supposed to be non-judgmental, who rail against them."

He said that society, and not just sports, has discriminated against gays, and had this comeback to any player who expresses concern about having a gay teammate:

“Any professional athlete who gets on TV or radio and says he never played with a gay guy is a stone-freakin’ idiot,” Barkley said. “I would even say the same thing in college. Every college player, every pro player in any sport has probably played with a gay person.

“They’re not going to do anything in the locker room,” he said. “Doesn’t work like that.”

Barkley's blunt language is a refreshing change from all the hand-wringing that often goes on around this issue. After covering this subject for a decade, Cyd and I agree that it would not be anywhere near as hard for a pro athlete to come out as is generally perceived, and it's nice to have Sir Charles in our corner (and please read Wise's entire column, which is excellent).