Share All sharing options for: Moment #6: Corey Johnson's story is told by Bay Windows and the New York Times 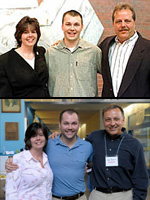 Johnson with his family in 2000, and with his mom and safe schools advocate in 2009.

Football, 2000. OK, it's is a bit of a cheat: This moment is really two moments that each elevated an important story in our history. In April 2000, New England-based Bay Windows printed the story of Masconomet (Mass.) High School football player Corey Johnson. Written by Peter Cassels, the story was a shocker: A high school football player who came out to his team…and lived to tell about it. Not only did he survive, he thrived on the team as his teammates embraced Johnson as they had for years before. Outsports quickly picked up on the story as did others; Weeks later, on April 30, 2000, the New York Times published a front-page story by Robert Lipsyte entitled, "Icon Recast: Support for a Gay Athlete."

It was Lipsyte’s article on the eve of the Millenium March on Washington that catapulted Johnson to national prominence. Lipsyte had been tipped on the story by Cassels. Lipsyte said he got the story on the New York Times page A1 because Johnson was speaking at the Millenium March that weekend – it was the news peg he needed to land the story on the paper’s front page. The next day, Johnson joined hundreds of thousands of people in Washington DC to demand equality for gay people.

While the fact that a football player is gay was surprising to many, it was the support Johnson received from his team that shocked most. From the Bay Windows piece:

Johnson tells two stories. The second game of the 1999 season was against rival Winfield High School. During the week leading up to the game, its captain was using anti-gay rhetoric and epithets. "The coach told his players he could not play. I found that out the day of the game."

When Johnson walked on the field, the Winfield player across from him said, "Faggot, we're going to kill you, you fucking homo." "I just started laughing because I had come out to my football team and my parents and this one kid thinks he's going to intimidate me. I went back to the huddle and I told the team what just happened. The other co-captain, said, ‘Don't worry Corey, we have your back.' We won 25-to-0."

Later in the season they defeated Weston High School. On the bus ride home the team sang. "Somebody said let's sing a song for Corey. They started singing the Village People's ‘YMCA' and, later, ‘It's raining men.' Then they started chanting ‘GSA!' I got up and bowed and everyone started laughing."

Johnson said between all the media attention he got in the spring of 2000, he received about 10,000 emails and letters in just the first year; He has gotten many more since. While he has read every single one, he has not been able to respond to them all in part because he was so young at the time and he just "couldn’t be these people’s therapist."
Among those 10,000 emails were a couple from men who claimed to be closeted professional athletes. They told Johnson they were deeply inspired by his story of acceptance. Looking back, Johnson wonder just how inspired they were: "It couldn’t have been that moving, because they didn’t come out."

Johnson told Lipsyte at the time: ''Someday I want to get beyond being that gay football captain, but for now I need to get out there and show these machismo athletes who run high schools that you don't have to do drama or be a drum major to be gay. It could be someone who looks just like them.''

Over 10 years later, Johnson has gone way beyond. He is currently a director of programs at GLAAD where he has worked with the WWE. He is chairman of Community Board 4 in Manhattan, where he is the city’s youngest community board chair. He is also political director for Towleroad.com and is heavily active in the Democratic Party having worked on various political campaigns. Most recently Johnson was named one of 40 under 40 to watch in New York City government.

The thing that I’m most passionate about is fighting for LGBT people’s equal rights. Hopefully we gain full equality long before 20 years form now. But between now and then, it’s what I love to do and what I feel most connected to. For a good part of my professional life I’ve been able to be a professional LGBT activist. To get paid to do this type of work is really gratifying. I get paid to do what I love. Most people don’t get paid to do activism, so I’m really grateful for that. I’ll be involved in public policy and public life in some way.

He’s also been that gay football captain as an adult. He was one of the founding members of the New York Gay Football League in 2005 (and was the league commissioner after me), he won the Gay Games gold medal in football in 2006, and he was the co-captain of two New York Warriors teams that won the Gay Superbowl in 2006 and 2007. While he hasn’t played football in over a year, he is still a devout Boston sports fan and ran the New York City Marathon last autumn.
In his recent memoirs, An Accidental Sportswriter, Lipsyte remembers Johnson’s story:

I thought that because of Corey’s age and the iconograophy of high school football, this story was advancing the stories of [Ed] Gallagher and Billy Bean. …

For gay activists trying to shatter stereotypes, Corey Johnson was a rare find, a bright, vivacious quick study who also wrestled and played lacrosse and baseball as he won three varsity letters on a winning football team. He was also conscious of his role.

And then about his hopes and expectations for the story:

After the story ran, Ed Gallagher called me, ecstatic. "This Corey is a pioneer, a leader, but he’s up against the hypocritical right-wing hate mongers who want to punish people for being human. I say there are no straights or gays, just ‘strays.’"

We both thought the dialogue would begin now. This one was the Big Story, a high school football captain rallying the jocks, smashing the stereotypes. …

It never happened. They didn’t want to hear about gay players. It was off message, it complicated the mainstream fantasy.

Whether it opened closet doors for professional athletes or not, Johnson’s story as told by Cassels and Lipsyte lifted stereotypes, changed dialogue and affected 10,000 people enough to write to the 18-year-old. Plus, it launched Johnson’s important career fighting for gay equality.

Sounds pretty successful to me.