Share All sharing options for: Moment #28: Sheryl Swoopes comes out 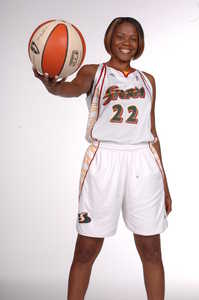 Basketball, 2005. This is a tough one. On the one hand, Swoopes is one of the most decorated professional athletes to have ever come out. She's considered one of the greatest female basketball players of all time. She won three Olympic gold medals. She was a seven-time WNBA All-Star and three-time league MVP.

When she came out, it was the biggest sports talk story of the week. In 2005, sports media outlets were still not talking about these issues much; Swoopes' announcement opened the door to those conversations. Not surprisingly, the reaction of many was, "Oh shocker, a player in the WNBA is a lesbian." But it gave many of us the opportunity to talk about homophobia in women's sports in a way the average straight sports fan hadn't thought of.

On the flip side, Swoopes was a flash in the lesbian pan. For a week she was out and proud, talking in every media outlet she could (thanks in large part to publicist Howard Bragman). Then she went on an Olivia cruise and when she got back...nothing. She quietly went back to her life and back to playing basketball, making rare appearances on behalf of gay issues or gay organizations.

So when it was discovered last autumn that she had ended her relationship with a woman and was engaged to marry a man, her legacy as a lesbian pioneer was virtually shattered. What has been disappointing is that she hasn't taken up the powerful mantel of bisexual pioneer, opting to stay silent about her sexual orientation post-lesbianism.