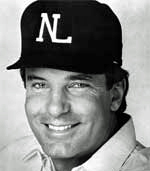 Baseball, 1988: Dave Pallone was never one to back down from a confrontation, good traits for an umpire. He was famously known for an April 1988 for an onfield incident where he went chest-to-chest with Cincinnati Reds manager Pete Rose. But seven months later, Pallone's 18-year pro umpiring career was gone after he was fired for being gay.

Pallone wrote on his blog earlier this year: "On November 30, 1988 I learned firsthand what homophobia in sports was all about. That was the day the Major League Baseball fired me because I was gay. After 18 years as an accomplished umpire, 10 of those years with the National Baseball League, Major League Baseball decided there was no room for a gay man within their ranks. That decision by Major League Baseball twenty some years ago left a scar on the face of our national pastime."

The context for the firing concerned Pallone's alleged involvement in a teenage sex ring, but he was questioned by authorities and cleared. But baseball Commissioner Bart Giamatti didn't let silly things like facts stand in his way. "We just don't feel you can handle all the pressure from the negative publicity," Giamatti told Pallone, according to the book "Collision at Home Plate: The Lives of Pete Rose and Bart Giamatti" by James Reston. Among the allegations included in Pallone's letter of dismissal was one from Pete Rose saying Pallone had picked up a man at a Cincinnati bar, according to Reston.

Pallone did not go quietly. In 1990, he wrote “Behind The Mask: My Double Life In Baseball," which became a New York Times bestseller. Pallone, while not naming names, said he could field an All-Star team from all the closeted gay major leaguers.

Pallone lives in Denver and works as a diversity trainer, where he speaks to companies and organizations about sexual orientation. He told Outsports in a 2007 interview that he has received 700,000 letters since writing the book, testament to the power of his story.