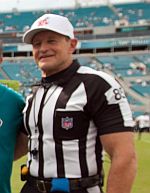 The first reference I can find to Outsports calling NFL referee Ed Hochuli "Guns" was 2002, and while we can't claim to have coined the nickname, it certainly has stuck. CBS in Phildelphia, for example, has a 21-photo gallery of the buff 61-year-old ref with the bulging biceps.

Hochuli, called the rock star of NFL refs by the New York Times, is the most recognized official and one who kept his locked-out brethren motivated and sharp the first three weeks of the season while they were idle. That's when the replacement referees were employed, a travesty that came to an end only when a bad call cost the Packers their game at Seattle. Guns and the boys were back Sunday for the first time and it was a noticeable improvement.

While mistakes were made by the regular refs, the calls were consistent and the games moved crisply compared to the first three games, when it appeared no one had anything under control. Hochuli got assigned the low-wattage Bengals-Jaguars catfight, but he's not complaining. He does find the obsession over his biceps among players, fans and the media to be baffling:

“That is really sick. I get a kick out of the arm thing. Players come up and say, I want to compare arms. Their arms are the size of my thighs. It’s a joke. It’s a sideshow. My arms are not that big.”

Jim Allen jokes that Hochuli has a contract clause mandating only warm weather or dome games so he can wear shirtsleeves. And Hochuli's such a hit that he is likely the only ref that fans want their picture taken with: 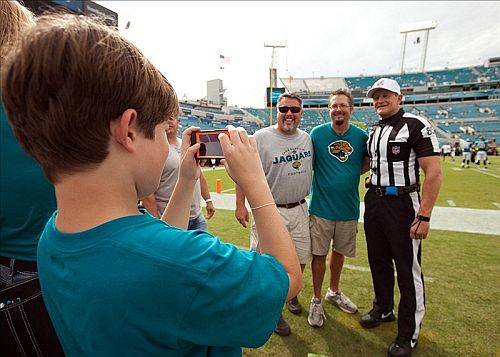