John Dillinger did a double-take as he walked through the lobby of the Seaport Marina Hotel in Long Beach, Calif., one night in 2005 after a baseball game. He saw a flier with a “really good-looking, furry, muscular guy on it.” It advertised Bear Night once a month at the hotel, and Dillinger was intrigued.

"I walked into the lobby and my room was fairly close to the lobby where that club was and I saw the big flier outside and it said 'Bear Night.' I was like, 'Oh my God, no way.' Plus, there were all these big burly and masculine men walking in and out of that place,” Dillinger said.

“I did react, or I should say, my eyeballs reacted. I just hung out in the lobby a little bit so I could just look around at who was going in and coming out. I kind of walked by the door and peeked in and that was about it. I didn't know anything about the bear scene. I didn't realize there was another subgroup of big, masculine men that were gay. It was really shocking to me in a good way.”

Though men his type were feet away, Dillinger instead went to his room he shared with a teammate and called it a night. Being a closeted professional baseball player staying in the hotel with many of his Long Beach Armada teammates and visiting players, Dillinger never came close to actually going into the club. The risks were too great.

The John Dillinger of 2012 would have no problem walking into a bear bar or any gay bar, a far cry from the closeted pitcher who spent 11 seasons in baseball's Minor Leagues, where he played for 15 teams and five different organizations. After retiring from the sport in 2005, he came out in 2007 and now identifies himself as a happy, out gay man.

“I felt like it was time and I wasn't afraid of the unknown any more. I felt like people needed to know,” Dillinger, 39, said about his decision to come out. He contacted Outsports after reading about the public coming out of Kevin McClatchy, former owner of the Pittsburgh Pirates, and was happy to share his story.

Ironically, Dillinger – from Connellsville, Pa., just southeast of Pittsburgh – was playing for the Pirates' Minor League system when McClatchy bought the team in 1996. He knew a woman who was dating McClatchy at the time and she suspected the owner might be gay; hearing it confirmed this September “inspired and thrilled” Dillinger.

“What some people do not understand is that it takes considerable courage to reveal your true self and to not worry about what others may think of you, especially in professional sports,” Dillinger said. “Whether it's as a player or executive, the unknown is what really keeps some of us in the closet. I'm very proud of Kevin and I wish he and his partner the best for years to come.”

Dillinger was a star athlete in high school and his focus on sports allowed him to put off dealing with his sexual orientation. His first awareness of same-sex attraction came at the age of 10, when he found himself intently watching Tom Selleck as “Magnum, P.I.” and Lee Horsley as “Matt Houston.” Rugged, manly men with facial hair like those two TV stars gave Dillinger a rush, yet in high school he was not conflicted about what that meant.

“It really didn't bother me that much,” Dillinger said. “I was so busy playing sports and I didn't have a whole lot of time to think about it.” He had a fairly typical teen experience, dating girls, playing sports and being one of the guys. 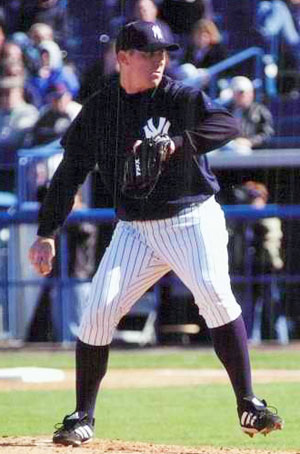 Drafted in 1992 by the Pirates as an 18-year-old while attending a junior college in Florida, Dillinger spent the next 13 years (he did not play in 1999 and 2004) bouncing around baseball's Minor Leagues, good enough to make a big-league spring training roster, but not quite good enough to stick on Opening Day or be called up during the season. An imposing right-handed starter (6-5, 230 pounds), he finished his career with a 68-70 record and 4.30 ERA in 1,201 innings pitched and countless nights sleeping on motel beds.

He played for five Major League organizations: Pittsburgh Pirates (five Minor League clubs), Texas Rangers (0; he blew out his elbow and had surgery), Toronto Blue Jays (one), New York Yankees (one), Anaheim Angels (two), plus six independent teams. He jokes that playing for four independent clubs in 2005 qualifies as some sort of record.

“I do not have any regrets whatsoever,” he said. “I had a blast, every minute and every day I was playing professional baseball. Even not being really true to who I was was not that big of an issue.”

He spent 1997 on the official Pirates Major League roster to prevent him from being picked up by another team, but was never called up. His highlight was spending 2002 spring training with the New York Yankees. “It was awesome, unbelievable, that team was loaded with talent,” he said of the experience. “Everyone was so nice and so cordial.” The most he earned in any season were those six months with the Yankees organization, when he made $90,000. It was quite a change to go from fried chicken and pizza in the typical Minor League postgame spread to filet mignon with the Yankees in spring training.

Just one of the boys

The other notable change as Dillinger moved from the lower rungs of Minor League ball to higher classes was the quality of the women. “They got better looking as you went up the ladder,” he said with a laugh. Despite knowing he was gay, Dillinger never acted on it once as a player (he had his first sexual experience with a man when he was 33 and already retired from baseball).

“At one point I thought maybe I could get rid of it,” he said about his same-sex attraction. He just did what everyone else was doing – drinking, partying and, hooking up with girls. “I liked to have a lot of fun and it was a way for me to not really have to think about all that stuff.” He even had three-ways, but never lusted after a teammate because “I was never attracted to anyone my age.” This helped in the showers, where the sight of naked teammates had zero effect on him.

“Being gay was a constant thought with me, but it just kind of stood there in a stalemate,” he said. When he was dating women, he felt that having sex with a man would have been a betrayal, and when he was single, he was simply afraid of being found out. His training as an athlete helped him to compartmentalize, he said.

"We're taught as professional athletes, if you don't reach your goal or your fail, you gotta be able to leave it behind and move on and keep moving forward. You can't dwell on anything. I almost kind of put that whole thing of who I really was in a compartment somewhere and it stayed there.”

Interestingly, Dillinger said he seldom heard gay slurs in the locker room or at the ballpark. Yet he stayed closeted because of fear of the unknown. “I was never afraid of anything I could see … but the scariest things are what you can't see or predict,” he said.

Had also had zero intention of every telling a teammate: “That was a big capital N, capital O,” he said. He was at point where even telling his family was intimidating and a non-starter. When he finally came out to his family after retiring, he still remembers his father's first words: “I love you even more.”

Time to move on

Dillinger decided to call it quits in 2005 while with the independent Long Beach Armada. His skills were eroding and it was time to move on to the next stage of life. His life as an open gay man began in 2007 after he told his family and had his first date with a man. He met the man online and “knew I was hooked” as soon as the man walked in to their first meeting wearing a cowboy hat and boots. 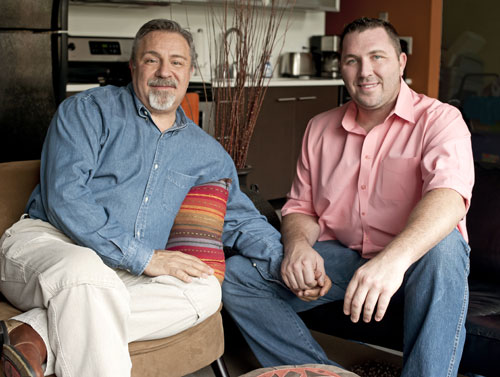 He now lives in Nashville and works as an account executive in accounts receivable for a healthcare firm in Nashville. His partner, Gregory Fisher, is also in the healthcare field and is a spiritual life coach. Dillinger describes himself as happy and content and still follows baseball passionately. He is excited about the World Series between the Detroit Tigers and San Francisco Giants because ex-Pirates manager Jim Leyland manages the Tigers. Dillinger remembers the first time he met Leyland in 1992.

"I was 18 and just drafted by Pittsburgh. I was walking through the training room at Three Rivers Stadium, and Leyland was standing there naked, applying hemorrhoid cream. I was awe-struck I think, and I walked right over to extend my hand to shake his. I wasn't even thinking of what may be on his hands! We got a laugh and I think he stuck out his hand to bust my balls. We didn't shake hands until after he washed them."

In the years since retiring, Dillinger has told a few ex-teammates that he was gay and all have been supportive. He says some of his former teammates and one coach he keeps in touch with on Facebook are looking forward to reading this story. Despite his time in the closet, he thinks baseball is ready to embrace an openly gay player because times have changed.

“Playing 162 games a year, you spend a lot of time with your teammates,” he said. “You spend more time with them than with your own family and friends. Teams that are close-knit and get along are usually the ones that have better results. Therefore, being up front and honest with your teammates about who you are and what you are about will garner more respect from your teammates.”

He also offers advice to any player considering coming out:

“My advice to a player who would decide to come out is to talk to one of your closest teammates first. If they are understanding and accepting like they should be, continue further and let the whole team know.

“I 100% believe that most of your teammates will respect you even more if you are honest with them. Baseball as well as all major sports have come a long way as far as not tolerating bigoted behavior and homophobic slurs. There have been quite a few examples recently. Successful athletes have one thing in common which helps make them successful: NO FEAR. This should be no different.”

Dillinger can be reached via email at (jwdillinger44@msn.com ) or on Facebook.

Thanks to photographer Robbie Quinn for use of his photos.