Share All sharing options for: Florida, Georgia alumni use football to pressure Jacksonville on gay rights 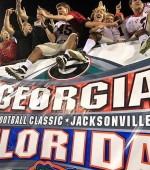 The universities of Georgia and Florida will play Saturday in Jacksonville like they have all but twice since 1933. Dubbed the "World's Largest Outdoor Cocktail Party," the game is a Southern tradition. Now, LGBT alumni and their allies from both schools warn the city that its anti-gay stance puts hosting the game in jeopardy.

The background: In August, Jacksonville City Council voted 10-9 against adding sexual orientation to its human rights ordinance, with the deciding vote cast by a member who previously supported the bill. Local business groups were in favor of the bill, saying that the city's stance is hurting the ability of them to compete for talented workers.

A letter signed by 50 alums and citizens, and first reported by our friend Matt Hennie at Project Q Atlanta, put the city on notice:

The University of Florida and the University of Georgia have long-standing non-discrimination policies that include sexual orientation. These policies have helped protect and assert the dignity and equality of students, alumni and faculty. Universities stand on principle, and their leaders are expected to educate and address such issues. When city leaders vote to allow bigotry, repercussions can be expected—and our concern—beyond equal rights—is that the game is in jeopardy of moving. If these two prestigious institutions reject discrimination, how long will they continue to bring fans, faculty, alumni and athletes to a city that accepts it? A ‘prime time city’ should be a welcoming host for everyone.

Jacksonville's contract to host the game expires in 2016 and the letter warns that cities such as Orlando, Tampa, Atlanta, Miami, New Orleans and Charlotte (all which protect sexual orientation in some fashion) will be active bidders and could use Jacksonville's anti-gay stance against it. It's a sound argument and one that hopefully will be enough to change minds and votes in Jacksonville in the future. Football is king in the South and can be a force to fight bigotry.