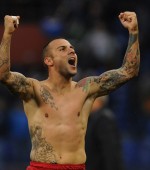 This week’s offerings include a lot of football, the American pro and American college version, and football, the international version we call soccer.

It's a fairly quiet time on the sports calendar (outside of football), with baseball ending, the NBA just starting and the NHL still in a lockout that shows no signs of ending.

Photo 1: Francesco Pisano of Cagliari Calcio celebrates victory at the end of the Serie A match between UC Sampdoria and Cagliari Calcio at Stadio Luigi Ferraris in Genoa, Italy. (Photo by Valerio Pennicino/Getty Images)

Photo 7: Tennessee Titans linebacker Colin McCarthy (52) awaits a decision by the officials in a game against the Indianapolis Colts during overtime at LP Field. The Colts beat the Titans 19-13. (Photo by: Don McPeak-US PRESSWIRE)

Photo 9: Liam McFerlane #102 (CAN), Guillaume Bastille #96 (CAN) and Michael Gilday #98 (CAN) respectively won the bronze, the gold and the silver medal at the Samsung ISU Short Track World Cup 500m(2) men's final at the Arena Maurice-Richard. (Photo by: Jean-Yves Ahern-US PRESSWIRE)

Photo 10: Vanderbilt Commodores quarter back Jordan Rodgers (11) warms up before a game against the Massachusetts Minutemen at Vanderbilt Stadium. The Commodores beat the Minutemen 49-7. (Photo by: Don McPeak-US PRESSWIRE)

Photo 11: exas El Paso Miners running back Nathan Jeffery (25) celebrates with a teammate after scoring a touchdown during the third quarter against the Houston Cougars at Robertson Stadium. (Photo by: Troy Taormina-US PRESSWIRE)