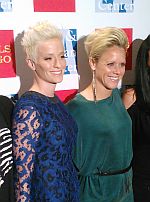 U.S. women's soccer player Megan Rapinoe was one of the team's stars as it won the gold medal at the London Summer Olympics in thrilling fashion and won a new legion of fans. Her greatest contribution, though, came off the pitch as an openly lesbian athlete. For being a role model in bringing awareness of LGBT people in sports, Rapinoe was honored Saturday at the Los Angeles Gay and Lesbian Center's 41st annual dinner with its Board of Directors award.

"The longer I've been out, the more stories I've been able to hear from people," Rapinoe told me Saturday. "People come up to me and say, 'you're the reason I came out, you're the reason I realized I was gay.' " Asked how much her profile has grown, she added: "Look at me, I'm the honoree for such a great organization."

Rapinoe has long been out within the sport, but she made it official this summer in an interview with Out magazine. "Coming out was sort of an evolutionary process," she said at the L.A. dinner. "I was like, why am I not out? I want to be out and I don't have anything to hide, I'm very proud of who I am. "

Rapinoe was joined at the dinner by family members and some teammates, including Lori Lindsey, herself openly lesbian. Lindsey has been out 10 years, but did not make it public until asked after the Olympics by Autostraddle.com. "Everybody knows that Megan and I are best friends, so when she did Out magazine, things got rolling," Lindsey told me explaining how she came to be publicly out. "I'm thrilled for Megan. I'm here to honor her tonight, so this is wonderful and I'm happy to be out and doing these interviews as well."

Rapinoe is still one of the very few publicly out athletes of any sex or in any sport and she had a simple message: "I think more people in general need to come out. Until that happens, we can't expect all these barriers to be broken down."