Share All sharing options for: Matthew Mitcham fought an addiction to crystal meth 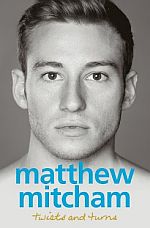 Australian Olympic diver Matthew Mitcham was addicted to crystal meth in 2011 that almost derailed his career. He had treated it with rehab, hypnotherapy and help from friends, he writes in his new book, "Twists and Turns," out Monday.

"I certainly was addicted to crystal meth," Mitcham told [Australia] Nine Network's 60 Minutes. "I just felt like such a massive sham."

The Sydney Morning Herald has a copy of the book and has this to say about Mitcham's meth addiction:

Self-doubt came crashing back, fueled by injury. Secretly smoking crystal meth to boost his moods, he was soon in the grip of addiction.

He knew the drug's dangers. But ''taking it was something I did … to take my mind off things that were upsetting me - to make me feel better about myself.''

The openly gay Mitcham has climbed back from last year's depths with the aid of Narcotics Anonymous, a drug rehabilitation clinic, hypnotherapy and the support of his inner circle. He's chased the demons away and is training for the Commonwealth Games in Glasgow.

Mitcham, who won the gold medal in the 10-meter platform at the 2008 Beijing Olympics, failed to make the semifinals in the London Games; he had been fighting a bad abdominal injury.

Mitcham will be available to chat on Google+ on Monday at 6 p.m. EST. Check it out here.