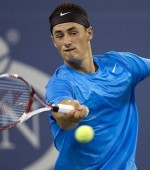 Australian tennis player Bernard Tomic says he's sorry for anyone who witnessed him wrestling another guy nude on the hot tub of a high-rise condo on Australia's Gold Coast (video below). Police were called after witnesses feared one of the men would be tossed off the balcony, but no charges were filed. Said Tomic:

"It was a bit of a wrestle and laugh around that came out the wrong way. ... It’s not their (the police) fault. They didn’t know who was up there, or what was going on -- they just wanted to come check and found it was me."

Tomic never addressed why he was wrestling another man nude on his 20th birthday (he said it was "a giggle and a laugh"), though one media outlet called it a "play fight" despite a witness saying it looked like the two guys were trying to kill each other,

Tomic is considered a rising star but he has badly slipped in the tennis rankings. In last year's U.S. Open, John McEnroe accused him of tanking his match against Andy Roddick.