Boxer Orlando Cruz: 'I'm the faggot who's going to kick your ass'

Share All sharing options for: Boxer Orlando Cruz: 'I'm the faggot who's going to kick your ass' 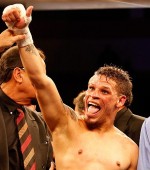 Orlando Cruz, the first openly gay active pro boxer, gives a wonderful interview to Lukas Eberle of the German website Spiegel. One revelation is that boxer Oscar de la Hoya once asked Cruz if he was gay. And I loved Cruz's answer when asked how he would deal with a homophobic opponent.

SPIEGEL: Your last opponent [whom Cruz defeated Oct. 19] had no problem with your homosexuality. What will you do if your next adversary is less tolerant?

Cruz: Oh, you know, there will be people like that, I'm sure. Someone will come along who calls me a faggot or a fairy. I'll say: "What? You call me a faggot? Okay, if you like. But you'd better watch out, because I'm the faggot who's going to kick your ass."

That's awesome and shows how strong and confident Cruz is in himself and his abilities. This all has grown since he has come out, as this passage illustrates:

Cruz: The other day I was training at a boxing gym in Puerto Rico, and a group of boxers were standing next to me. They were talking about me and I could hear everything. One of them said to his pals: "Hey, we'd better not take a shower before going home today." That's totally ignorant. I'm a professional, an athlete. I go to the gym every day and I train hard. I don't go there to watch anyone in the shower.

SPIEGEL: Did you confront them?

Cruz: No. In the old days that would have made me angry. But now that I've come out, everyone knows the truth. That's like a protective shield against comments like that. Stupid remarks and jokes no longer hurt me, because I can stand by being gay. Nowadays I can even laugh at jokes about gays. Now I feel free, hungry and strong.

The de la Hoya angle involves him asking Cruz in the presence of others: "Orlando, tell me, are you going to tell people that you are gay?" Cruz responded: "No, I'm a man."

The interview is worth your time since it delves into the process that Cruz went into before coming out, including sounding out media and boxing contacts. It's a primer for an athlete being totally prepared of what he was going to confront once he was true to himself. Cruz is someone to be admired and a great role model for other athletes and gay people struggling with coming out.