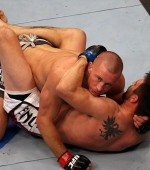 Seth Davis, college basketball analyst for CBS and Sports Illustrated, is a dad and has no problem letting his sons watch two guys pummel each other in a boxing match. But he draws the line at mixed martial arts, because it's two guys pummeling each other in a homoerotic way. Davis tweeted this on Sunday (two tweets in succession, since deleted):

Looking on news sites showing picture of two muscular bloody men in homoerotic fighting pose…. Sorry, I’ll never get this UFC thing. Maybe I’m a prude on this but I’m also a dad. I don’t mind my sons watching boxing, but I wouldn’t want them watching a UFC bout “

Allow me to translate.

Davis saw [George] St. Pierre, known primarily for his unstoppable wrestling, smothering [Carlos] Condit and working from side control. So what's the first thing that popped into his head? Gay sex. And that's something to be condemned in the Davis household, as he would surely fail as a parent if he allowed MMA to convert his children to homosexuality.

To his credit, after blowback from the MMA community, Davis apologized:

My tweets were stupid and thoughtless and you are right to call me out. Mea culpa.

There is no denying that MMA has homoerotic aspects given the attire and close contact the fighters have, but there's nothing "icky" about that; the same holds true for other sports, or has Davis not seen basketball players constantly hugging teammates and slapping asses? I have always enjoyed watching Davis on March Madness and took him to be a thoughtful guy. His tweets were offensive and his apology seems sincere and direct.