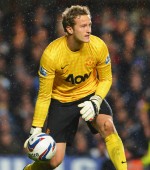 There may be no more well-known sports team in the world than Manchester United, so when one of its stars says soccer is ready for an openly gay player, it's news.

Anders Lindegaard, 28, is the team's goalie and in in a blog post he wrote for a a Danish website, he wrote: "Gay people need a hero. They need someone who dares to step forward and stand for their sexuality.”

Lindegaard girlfriend is a model and he said that industry is very gay-positive. He thinks the same can be true in soccer, though he recognizes the obstacles.

“Homosexuality in football is a taboo subject. The atmosphere on the pitch and in the stands is tough. The mechanisms are primitive, and it is often expressed through a classic stereotype notion that a real man should be brave, strong, aggressive and loyal. And it is not the image that a football supporter associates with a gay person.

“Of course it is a problem for young gay guys who love football, and feel they must stop their sport. Any discrimination is totally unacceptable, regardless of whether it is to do with color, religion or sexuality.

“A gay player would fear the reception he gets from fans. My general impression is that other players would accept a gay player without any major problems.”

Lindegaard says he does not have an friends he knows are gay but in his blog post (I was able to read translations from Danish) he is aware of how sport still lags behind the rest of society in dealing with gay issues. "Football still remains as a relic of the past in terms of tolerance," he wrote. And he is skeptical of surveys that show a majority of soccer fans saying they would support a gay player.

The mechanisms of fan culture is more complicated than that, he wrote, adding that an openly gay player would face taunts and abuse from opposing fans. This would not change, he wrote, "as long as homophobia is not considered as a crime on par with racism."

Lindegaard's comments are refreshing to hear since so few big-name soccer players have addressed homophobia. It's an important statement to say it's time for an openly gay player to come forward.