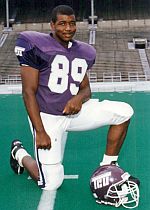 Editor's note: Vince Pyror played defensive end/linebacker for TCU. In 1994, he set the school's single-game sack record after coming out to his team as gay. He wrote this open letter to Tank Carder, another former TCU linebacker now with the Cleveland Browns, who wrote homophobic tweets this week.

By Vince Pryor
For Outsports.com

I was surprised and disappointed to read about the anti-gay remarks you made on Twitter. As an alumnus of TCU and a former football player, I know from my own experience that your words do not represent the culture of TCU. However, I am disappointed in the lack of understanding you’ve shown in the effect your words can have on young athletes who consider you a role model.

As a public figure and a representative of both TCU and the NFL, your words have power, especially for young athletes who happen to be gay. When I was an athlete at TCU, I lived in fear for many years over what would happen if my coaches or teammates learned that I was gay.

I feared that I would be kicked off the team or that my scholarship would be taken away and that my family would be embarrassed and ashamed. As a result, I hid in the background and didn’t play to my full potential because I was concerned that any attention I drew to myself would lead to further questions about my personal life and to rumors or ridicule that would ultimately have me removed from the team.

These fears led me to consider suicide on a number of occasions and it was only through the support of a few close friends that I developed the courage to tell my coaches and teammates that I was gay, just before the last game of my senior year. To my surprise, nearly all of my coaches and teammates supported me. In that final game on Nov. 25, 1994, with a share of the conference championship on the line, I felt free for the first time and I had the best game of my college career. With nothing to fear, I played to my full potential and had a record number of sacks (4 ½), helping my team earn a share of the conference championship and the opportunity to play in a bowl game for the first time in 10 years.

While this story may not seem relevant to you, it is. The reason I stayed in the closet was because of fear. I feared that there was nothing worse that could happen to me than other people finding out I was gay. I feared that if anyone found out that I was gay, I would lose everything. When you call someone a faggot, it isn’t "just a word." It is a degrading term that implies there is something wrong with being gay. It implies disgust in something you don’t want to be associated with. And ultimately, it pushes every young athlete who may be struggling with their identity further into the closet, where they are surrounded by their fears and insecurities.

When you call someone a faggot, you reinforce all of the fears that I struggled with and other young gay athletes struggle with to this day. They will think that your views represent their teammates’ views and they will stay hidden and never realize their full potential as an athlete. Although it may be hard for you to understand, this kind of fear and isolation can be devastating, as it was for me for many years.

I was in the stands at the Rose Bowl game in 2011 when you were named defensive player of the game and helped to seal the victory for the Horned Frogs over Wisconsin, and I admire you as an athlete. But I hope you can come to understand the impact that your words can have on those who look up to you and the fear and pain your words cause.

Everyone who plays sports should be able to play without fear that their identity will affect how others view them as an athlete. I was fortunate to have that chance in the last game of my career. However, until you and others understand the fear and pain your words cause, there will continue to be many young gay athletes who never have that chance.

Pryor and his husband Alan Detlaff, himself a TCU alum, live in Chicago. Pryor can be reached at vincentpryor89@gmail.com or on Facebook.

Read about Pryor's coming out journey as an openly gay college football player.