Share All sharing options for: Baseball novel 'Fontana' deals with the outing of a gay New York Met 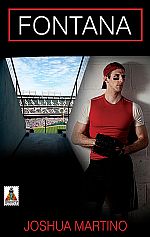 Editor's note: Joshua Martino's novel "Fontana" was called "illuminating and beautifully written" by the Advocate. Outsports asked him to write about his motivations for writing the book.

One of a writer’s responsibilities, as I see them, is to dispel bad ideas. In my new novel, “Fontana”, I attempt to do just that by imagining the emergence of the first out baseball star. He’s Ricky Fontana, slugging right fielder for the New York Mets, who, during a record-breaking season, is discovered to be gay by a troubled sportswriter. The bad idea to be dismissed is implicit and widespread: Sports are no place for gay men.

Outsports has tracked tolerance’s slow upward trajectory through coverage of out athletes and their LGBT-friendly teammates. Still, also noted here are countless homophobic remarks from players and fans. Such bias would be unimaginable if directed at a particular race or religion, yet gay slurs in sports seem almost ordinary. Polls dating back a decade claim that athletes in the four major sports leagues are ready for a gay teammate, but none has emerged. One reason he’s still hiding is that bad idea: Professional sports are played for and by straight men.

Imagine if that ignorant notion were dashed! Imagine if an openly gay man took the field, the court, or the ice. Think of the damage to a host of terrible ideas!

Athletes are heroes. Though they don’t save lives or cure disease, we draw strength from their success against tremendous pressure not to fail. For a parent reluctant to accept his son’s sexuality -- or even just fearful of the obstacles the boy will face -- the arrival of a real-life Ricky Fontana offers an archetype in the beloved society of sports idols. The first bad idea to go would be that a gay man can’t be a straight man’s hero.

Another fallacy to fall might be that gay men are better off hiding their identities in other professions. We bond (and fight) over sports more readily than other diversions. We feel a personal connection to our favorite ballplayers. We wear their names on our backs. So rooting for that gay slugger might make some rethink their aversion to seeking treatment from a gay doctor or counsel from a gay attorney. Or at least that doctor or attorney might feel emboldened to stand his husband’s portrait on his desk. The acceptance of patients and clients will follow.

With a real-life Ricky Fontana swatting home runs, would preachers and pundits be able to claim that gay culture is perverse and irreconcilable with mainstream traditions? Perhaps their bloviating would seem emptier with a gay man holding his cap to his heart and singing the anthem before the ump cries “Play ball!” Could culture warriors claim that gays and lesbians participating in a public institution would bring it to ruin (a charge leveled by the anti-marriage-equality movement)? Not when the first gay player gives way to a second and a third, and the game goes on as it has for countless summers.

I hope a gay ballplayer’s emergence would dent a seemingly less pernicious idea: that the private lives of public figures matter. Gossip about a Mets star inspired me to write this novel. If a player came out, chatter about which player might be gay would eventually quiet. Normalizing gay athletes is one more reason to turn off our televisions after the final out and ignore the blathering industry paid to obsess over celebrities and the bored or boring folks who cling to gossip.

Think of all the nonsense to be ousted by that fearless jock who faces reporters one day and says: “I’m gay.” Kids learn concepts like camaraderie and cooperation from sports. Seeing a gay player succeed side-by-side with hetero men might chasten young minds corrupted by backward parents or classmates who use “gay” and “fag” as catchall pejoratives. Maybe adult fans could be swayed against labeling homosexuality as immoral or threatening. Perhaps this jolt would be a blow to blind faith, superstition, and other tyrannies of the misused mind.

Nothing will be the same. That’s one reason he hasn’t arrived, the superstar gay slugger. That’s why in my novel he does not declare himself — he is discovered and revealed. Gay Major Leaguers must know the consequences to coming out are further-reaching than their own privacy. The implications are a cultural moment no less significant than when Jackie Robinson took the field. Robinson, the first black ballplayer, arrived nearly a decade before the end of segregation. The real-life Ricky Fontana won’t predate legal rights for gays and lesbians, but he will be just as destructive to the bias that kept him out of the game. That will make his arrival so much sweeter.

You can buy "Fontana" through Amazon. You can read more about Joshua Martino on his website.