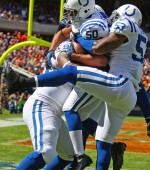 To the list of possible hazards of playing in the NFL add "dangerous boners." That's the opinion of Chicago Bears linebacker Lance Briggs, when asked about players using Viagra to help with (on-field) performance. From CBS Chicago:

“I heard about that. I guess, boners. There’s gonna be a lot of dangerous boners on the field,” the Bears linebacker said. “I don’t know. I usually do the tackling. I just do the tackling, but apparently maybe some offensive guys, they’re getting poked around.”

It would certainly make the games more interesting to watch, especially with the tighter-fitting uniforms. Briggs was responding to teammate Brandon Marshall who said: "Some guys, they’ll do whatever they can to get an edge. I’ve heard of some crazy stories. I’ve heard (of) guys using like Viagra, seriously. Because the blood is supposedly thin, some crazy stuff."

For the record, Pfizer, which makes Viagra, says the product is not designed for any use other than erectile dysfunction. Then again, the compound in Viagra was first tested as a hypertension drug.

Photo: Indianapolis Colts linebacker Jerrell Freeman (50) celebrates an interception for a touchdown during the first quarter against the Chicago Bears at Soldier Field. (Photo by: Dennis Wierzbicki-US PRESSWIRE)