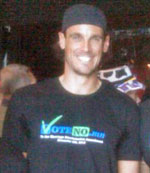 Minnesota Vikings punter Chris Kluwe has had a popular blog, Out of Bounds, on the website of the St. Paul Pioneer-Press. His posts have gotten as much as 100,000 page views. That has all ended after Kluwe announced he will stop doing the blog for the paper after it ran an editorial about the Minnesota same-sex marriage ballot measure. The paper did not take a position (a "yes" vote will amend the constitution to prohibit such marriages) but its reasoning was so lacking in logic that it amounted to a defense of the ballot measure.

Kluwe laid out his objections in a series of tweets:

Very disappointed in @PioneerPress editorial. Plessy v. Ferguson obviously doesn't mean what it used to. You can say you're not taking a side one way or the other all you want, but if you print that in the editorial section you just took a side. I will not be associated with any organization that tries to pull some bullshit like that. Have the strength of your convictions.

My main issue with the Pioneer Press editorial is this: It's a lie. I have no problem with them taking a position I disagree with. What concerns me is them presenting a completely biased piece (word choice, examples used, conclusions) as a neutral position. That's not only irresponsible journalism, it's massively hypocritical. Have the courage of your convictions.

Attach your name to what you believe in. Don't try to confuse people through obfuscation and selected presentation of arguments. It ruins discussion, and you should be ashamed. I will not abide lying. A stable society has to be built on a foundation of trust, and that editorial just eroded some of it away.

Here's the part of the editorial that most bothered me by using the religious argument and making anti-same sex marriage opponents somehow the victims:

Supporters of traditional marriage are not wrong to point out that religious groups who have refused to make their facilities available for same-sex couples have lost their state tax exemption and that religious groups have been forced to close their charitable adoption agencies as a result of having to choose between fulfilling their social mission and acquiescing to a new definition of marriage. And that whenever schools educate children about marriage they will have no choice but to teach it as a genderless institution. Indeed, some members of the movement are aggressive. In California, activists outed people who gave financial support to that state's marriage amendment, some of whom lost jobs as a result. And we saw it here in Minnesota when Target Corporation was subjected to extensive protests for having contributed to a gubernatorial candidate who supported traditional marriage. It did not matter that Target had a long record of support for the GLBT community or that its contribution had nothing to do with the definition of marriage. It was about sending a message that those who took the wrong position on marriage would pay a heavy price. In Chicago, the mayor of one of the nation's largest cities and a former high ranking White House official big-footed a fast food chain and its CEO for his belief in traditional marriage. For those who hold traditional beliefs about marriage, increasingly the force of law will be brought to bear on matters of education, speech and practice. Already in the course of ordinary reporting on this amendment, the Pioneer Press has encountered traditionalists who withhold their names for fear of the possible consequences of addressing the issue. None of which is to suggest that we do not support free speech and the right to protest and transparency in the political process. The point is that the story would be incomplete if it left out any mention of the consequences. And of course these consequences are appropriate or not depending on your stand on the issue itself.

The paper's editorial page has no balls. The editorial reads much more like a "yes" position and yet the powers that be obviously feared a backlash so decided staying neutral was the best course. The Minnesota Post found this:

"PiPress managing editor Chris Clonts has very publicly distanced the newsroom from the editorial, via Twitter: "I understand reaction 2 marriage editorial. Please know it in no way represents the newsroom or indiv. journalists."

The bottom line is that being against gay marriage is a bigoted position, no matter how much you quote the Bible or use words like "tradition" and drag children into it. Bravo to Kluwe for standing up for his convictions.