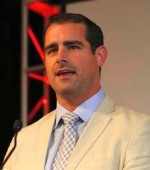 History will be made in Pennsylvania when Brian Sims is elected to the state House, the first openly gay person to do so. Sims, a former college football captain familiar to Outsports readers, won a hotly contested Democratic primary in the 182nd district where he beat a longtime incumbent. Sims does not have an opponent Tuesday and he has spent the past few months campaigning for other candidates; there are two other gay men and one lesbian running for House seats in the state.

Another gay former Pennsylvania athlete, cross-country runner Craig Cassey Jr., is a sophomore at Georgetown University and running for one of eight seats on the Advisor Neighborhood Commission, part of the District of Columbia government. Said Cassey:

"I'm running as a write-in, no competition. The ANC handles zoning issues primarily, liquor licenses, beautification projects, and the approval of Georgetown University's campus plan which dictates if we can build on campus, if we can extend our reaches off campus, how many students we can accept, etc. The student ANCs are typically the ambassadors to the community, given the task of rebuilding bridges between community members and students alike, which is a large part of why I'm running."

Athletes are also prominent in two of the four states where same-sex marriage is on the ballot: